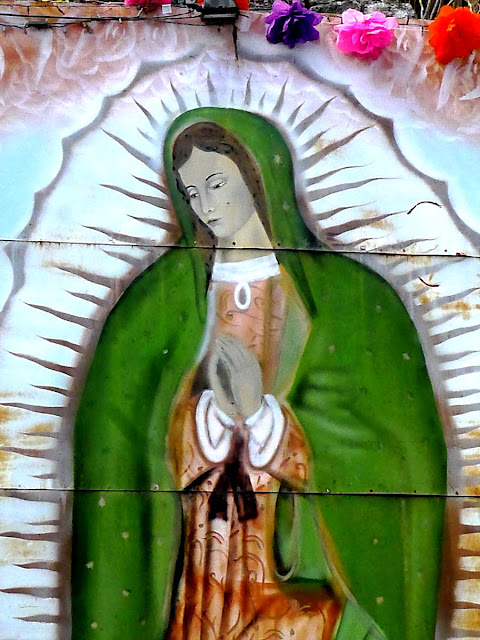 Christmas season "officially" begins on December 16, day when the first Posada takes place, Mexicans join together for the festivities of La Virgen de Guadalupe, Our Lady of Guadalupe, on December 12. This is one of the most important dates in the Mexican calendar.

On this date, thousands of the faithful to Our Lady of Guadalupe, from all over the country make the most important pilgrimage of all those undertaken during the year to the Basílica of Guadalupe, in Mexico City, where the miraculous image of la Virgen Morena is kept. 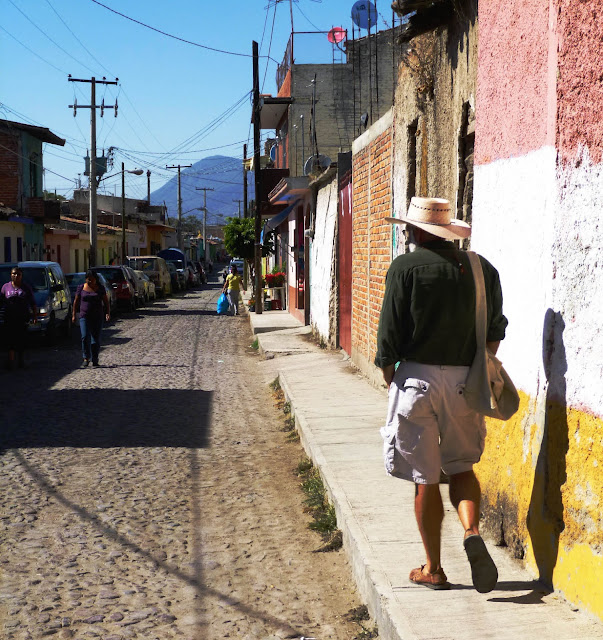 Brad Walks Thru San Juan Cosala
We decided to make our pilgrimage to the Virgen of Guadalupe in the small town of San Juan Cosala, where the cobble stoned streets were adorned with homemade altars in honor of the Virgen, and where I remembered seeing a large mural painted on the old church wall.
The key figure in acceptance of the Catholic religion by the indigenous peoples of Mexico was the Virgin of Guadalupe, whose story goes back to 1531, just twelve years after Hernan Cortes first set foot on Mexican soil.
On December 12, 1531, as the story goes, a poor Indian named Juan Diego was walking along in a desolate area north of Mexico City, seeking water for his uncle. Suddenly, on a hillside, he saw a vision of a beautiful woman, who directed him to a spring of fresh, cool water. A few days later, in the same spot, the vision appeared again to Juan Diego. This time, she instructed him to go to Mexico City to tell the high church officials to build a church in her name on that site. Of course, the ecclesiastical officials did not believe the poor Indian. Why would the Virgin Mary appear to someone so lowly? They asked for proof. When Juan Diego returned to the hillside and the Virgin appeared again, he asked her for a sign. Suddenly he saw some beautiful red roses, even though roses did not normally bloom in that area in December. He gathered them into his rough Indian tilma (blanket) and took them to Mexico City. When he opened his tilma for the high church officials, they fell to their knees in veneration and amazement. There, imprinted on the humble Indian blanket of Juan Diego, was the image of the Virgin of Guadalupe, exactly as Juan Diego had seen her. It is said that the image is so perfect in detail that one sees in the pupil of the Virgin's eye the image of Juan Diego.
﻿ 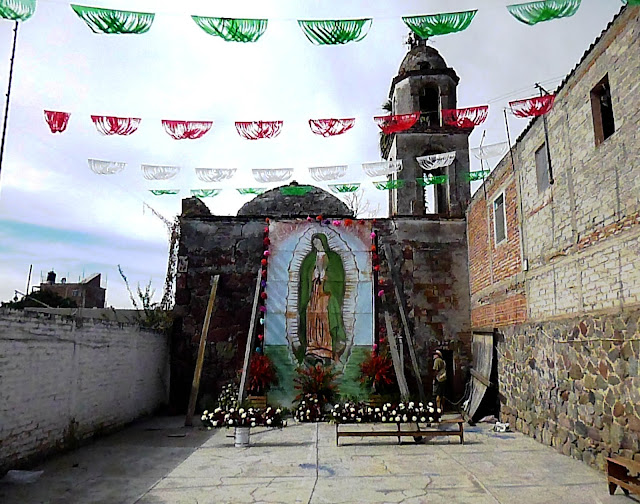 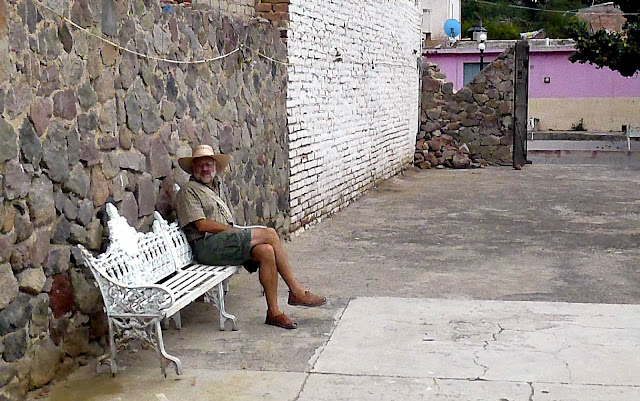 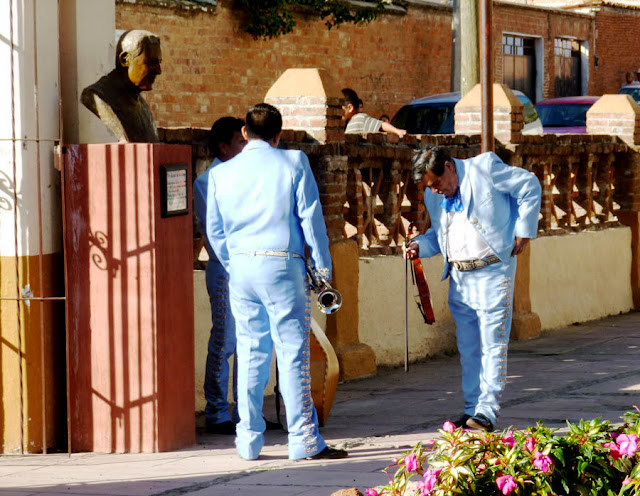 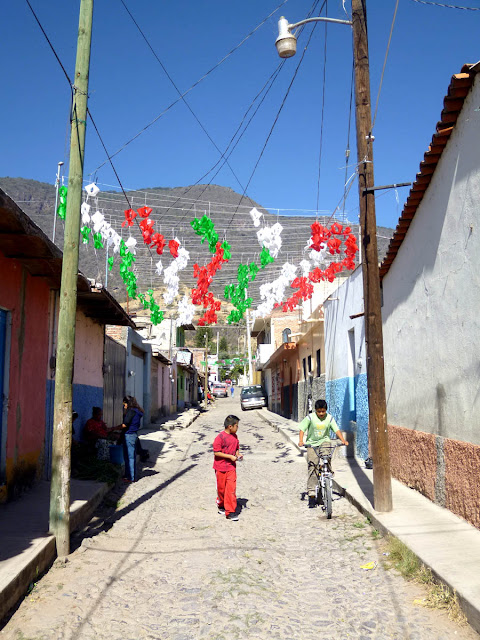 San Juan Cosala is a small town of approximately 12,000 people located on the North shore of Lake Chapala, known for its hot spring mineral waters and natural steam baths called temazcalli. It is the oldest town in the area and was originally a fishing village established by the Cocas Indians, a Nahuatl-speaking people, related to the Aztecs.

The exact foundation of San Juan Cosala is not precise. According to a type of ceramics found in the region, it is clear that the area was already inhabited during the Preclassic Period, prior to the Spanish Conquest. The name 'Cosala' is derived from the indigenous name spelled Cuzala, Cuzalan or Cozala-Cuzalan and has been given many different interpretations, including 'place of many warm springs', 'place of clean water' or 'place full of serpents'. Some authors believe it came from the spelling Cutzalan or Cotzalan which means 'between pots.' The indigenous peoples were ruled by Tlatoani and worshipped many different gods, including their main god, Ixlacateotl, Tlaloc, goddess of rain, Ehecatl-Quetzacoatl, god of wind, and Michicihuatl, the mermaid goddess and guardian of Lake Chapala. The village contained ceremonial centers at the four cardinal points where human sacrifices took place. Small clay pots containing blood collected from the earlobes of the indigenous people were thrown into the lake as offerings. 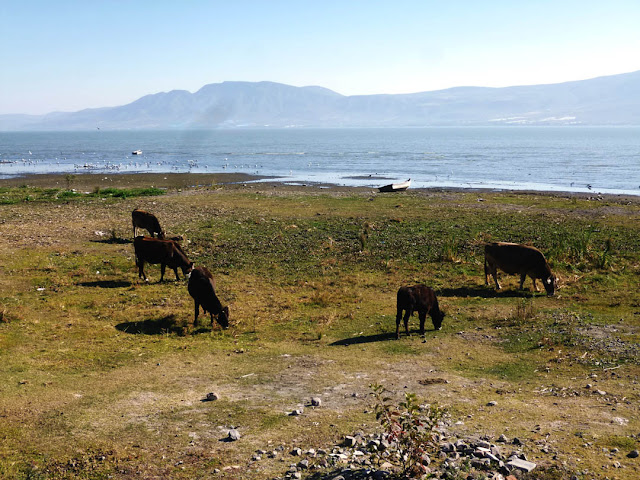 Grazin' On The Lake's Shore 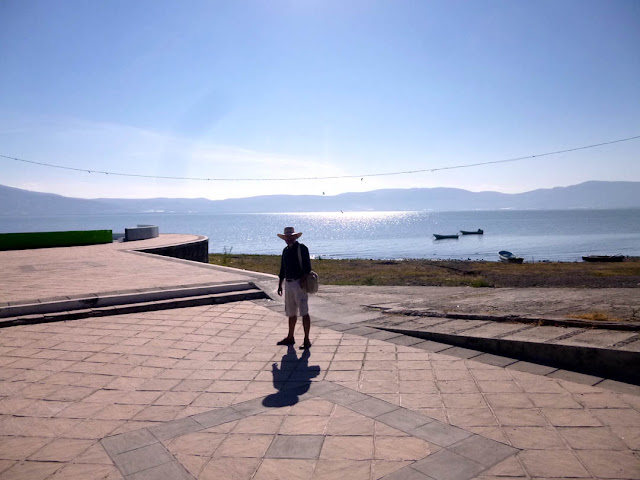 Malecon Man
In 1523 or 1524, the Spanish conquistador Captain Alonso de Avalos arrived in Cuzalan and conquered the region. Chief Xitomatl who controlled the area from Ajijic to San Luis Soyatlan surrendered peacefully. In 1531 the first missionary, Fray Martin de Jesus of the Franciscan order, arrived in the region and ordered the construction of a small chapel and the Hospital of the Conception next door. He converted Tlatoani and baptized him as Don Andres Carlos, in honor of the King of Spain. St. John the Baptist was declared to be the patron saint of the region and the name of the town was changed to San Juan Cosala. 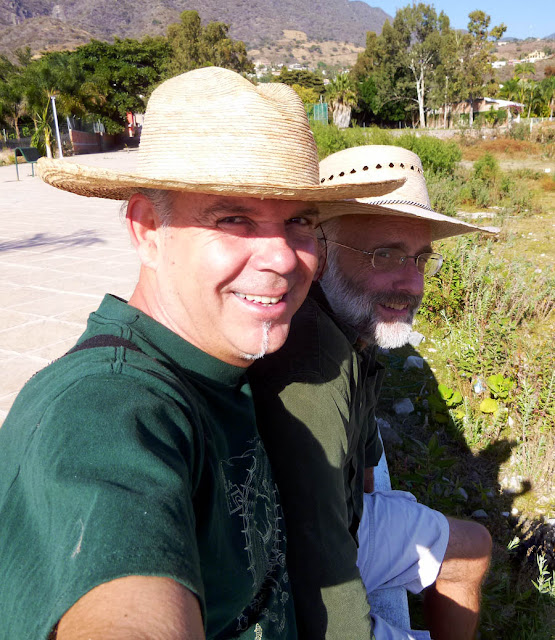 Malecon Men
Following the Spanish Conquest in 1519–21, a temple of the mother-goddess Tonantzin at Tepeyac outside Mexico City, was destroyed and a chapel dedicated to the Virgin built on the site. Newly converted Indians continued to come from afar to worship there. The object of their worship, however, was equivocal, as they continued to address the Virgin Mary as Tonantzin. 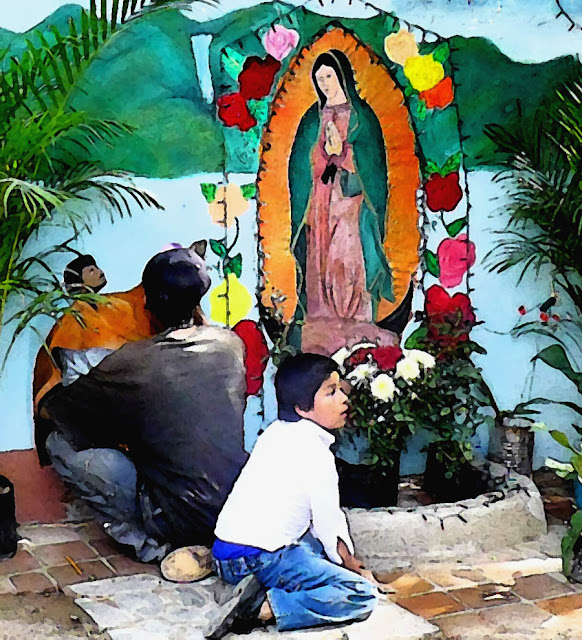 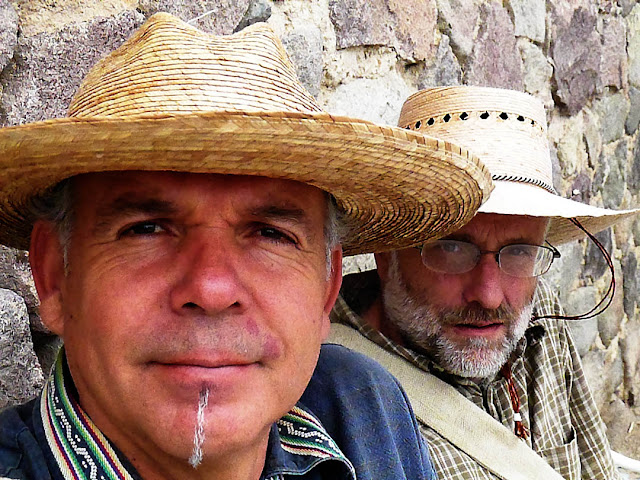 As we head into the holday season, we wish for you and yours
Paz, Prosperidad, y Un Mundo Mas Balanciado
Fco. y Brad
﻿
Posted by Art Xik Xik at 6:24 AM