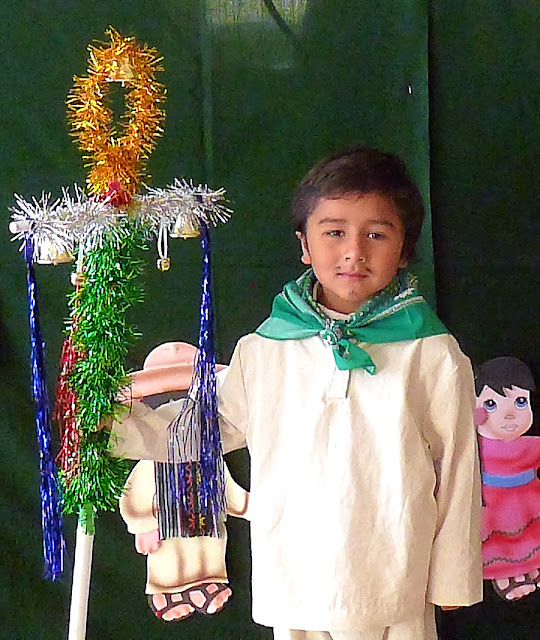 Antonio's Pastorela
Part of our extended familia lives right up the street at the corner, and the youngest member of the family is Anotnio, all of 5 years of age.  I usually greet Antonio in the mornings as he is rushing out the door to attend kindergarten.  He is a beautifully polite and sensitive child.  His parents Ana Maria y Luis are very proud of their youngest.  The entire family is a shining example of how a caring, functional familia can live happily in Mexico.
So when I was told that Antonio was to perform in his school Pastorela, I immediately jumped at the chance to attend.  I had been to a few Xmas plays and pageants in my day, but was looking forward to seeing a Mexican version...the Pastorela.
In Mexico Pastorelas are plays that evolved to recreate the biblical passage where the shepherds follow the Star of Bethlehem to find the Christ Child. In order to reach the birth place of the Redeemer, they have to experience a series of changes in fortune and confront the Devil, who will do everything possible to prevent them from completing their mission. It is at that moment that the Archangel Michael intervenes to defend the shepherds on their journey. 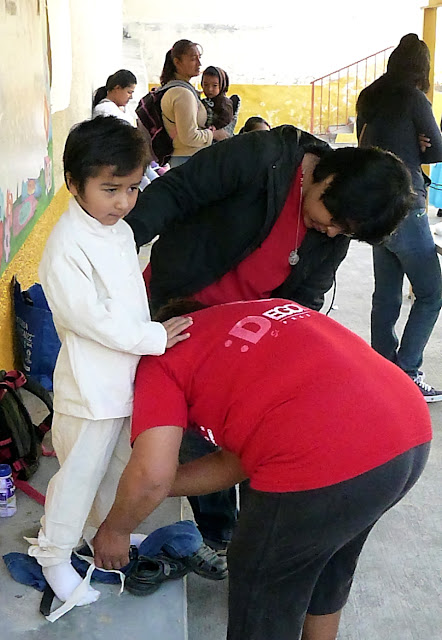 Pastorela Prep
The pastorela (Occitan: [pastuˈɾɛlɔ], Catalan: [pəstuˈɾɛɫə, pastoˈɾɛla]; "little/young shepherdess", diminutive of pastora, feminine of pastor, meaning "shepherd") was an Occitan lyric genre used by the troubadours. It gave rise to the Old French pastourelle. The central topic was always meeting of a knight with a shepherdess, which may lead to any of a number of possible conclusions. They are usually humorous pieces. The genre was invented by Marcabru, a chronic moraliser, who portrayed the "courtly" knight as a bumbling fool and the witty shepherdess as successfully blocking his advances.  - Wikipedia.
﻿ 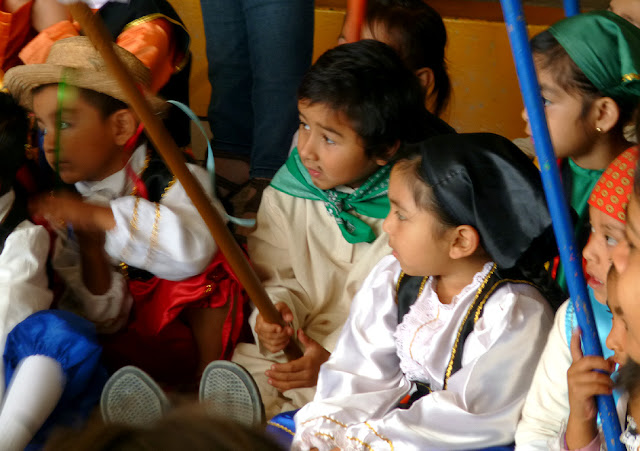 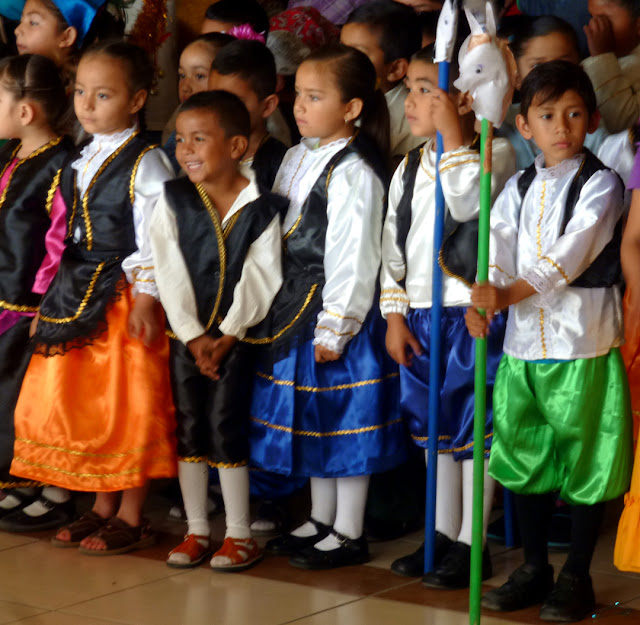 In The Wings
The indigenous people were much taken by the story of the shepherds who followed a shining star, perhaps because they identified it with their own legend in which a great comet announced the end of one empire and the birth of a new one, but above all, because when they rendered “adoration” to the Christ Child, the actors playing the shepherds introduced their own prehispanic dances that concluded in a mitote with leaps of joy. 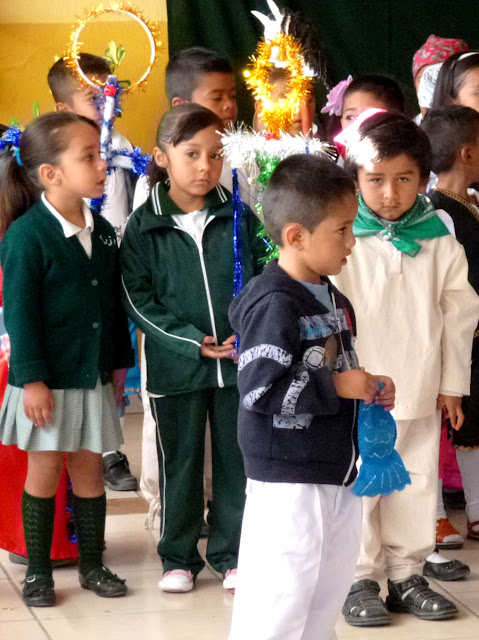 The first formal record of the pastorela we know of dates from 1536. It is called “El Auto de Adoración de los Reyes Magos’ (The Adoration of the Three Kings). Written in Nahuatl, dancing and music were added to it. It had thirteen actors: the Baby Jesus, the Virgin Mary, Saint Joseph, The Three Kings, their messenger, an angel, King Herod, his chief steward, and three Jewish priests.
-From Inside-Mexico.com 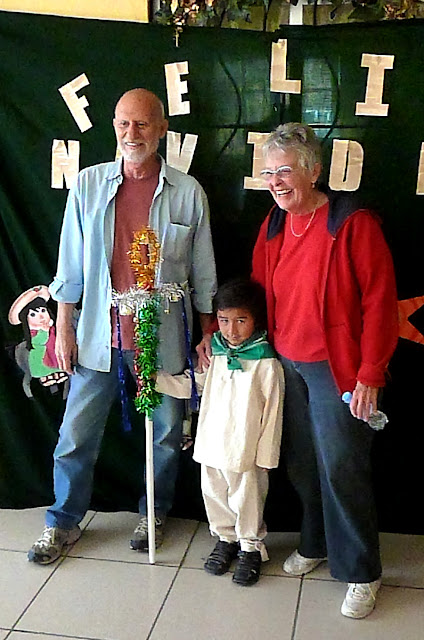 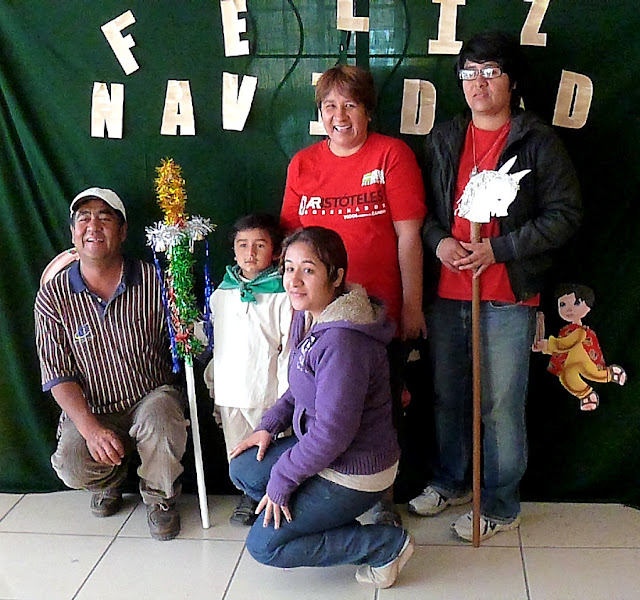 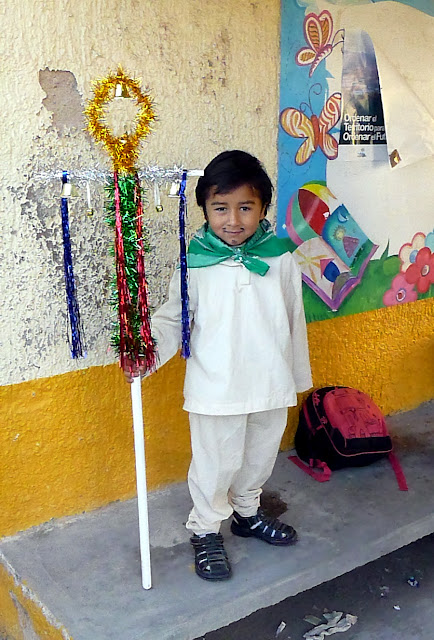 Ready for my close-up, Mr. DeMille

His work done, fotos taken, Antonio is ready to go home....all in a day's work for a little boy.
Posted by Art Xik Xik at 7:04 AM