I had read about the "Dance of the Tastoanes" and had seen some of the fantastical masks made for a previous year's celebration, but nothing could have prepared me for the surreal, psychedelic mix of local creativity gone wild and historical lineage that we experience during the annual ritual in Tonala, Mexico.

The dance commemorates an indigenous insurgence during the Spanish invasion of this area. 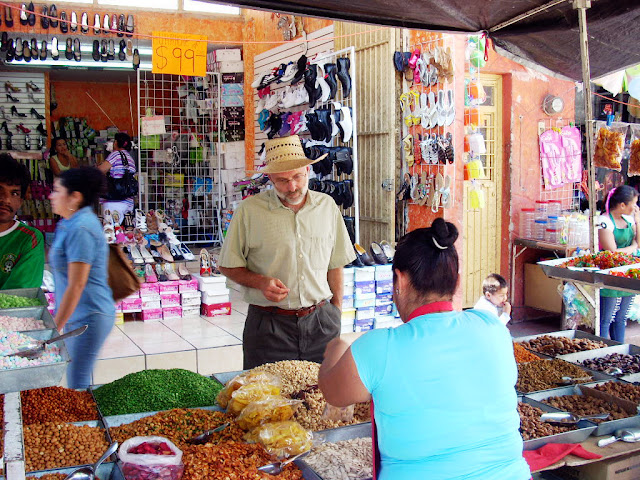 Brad stocks up on much needed cacahuates 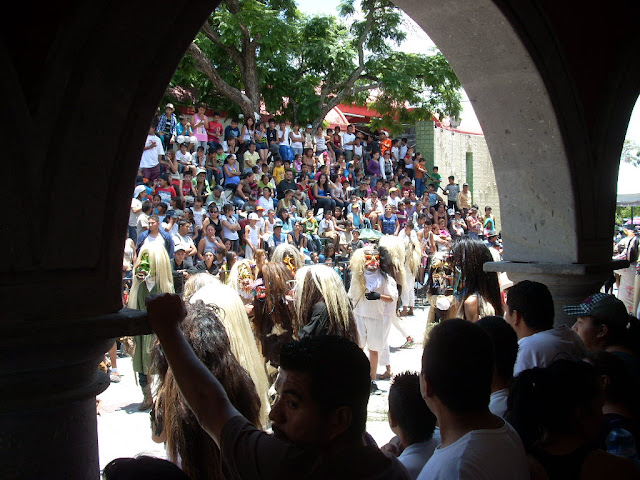 Strolling procession during the Dance of the Tastoanes

Saint James and the Moors: Mexico's Tastoanes by Carol Wheeler

Masked dancers took to the streets on July 25 to reenact an age old battle fought in Spain long before the conquest. The ceremonial tastoan (sometimes spelled tastuan) rituals come from the 12th century and were originally known as the dance of the Moors and the Christians. In Spain's version, the dance symbolizes the expulsion of the Moors by the Christians, while Mexico's variation is commonly interpreted as the representation of the Spanish conquest of Mexico in the 1500s. 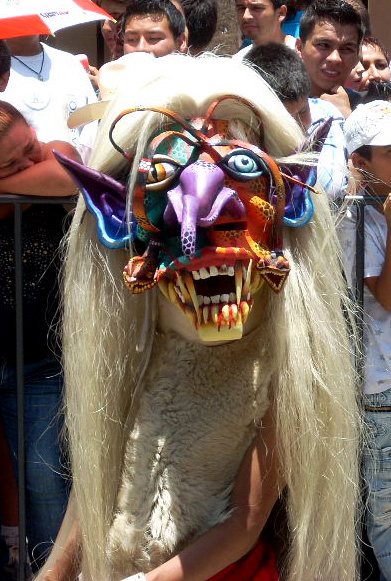 In Spain, Saint James — known as Santiago Matamoros — was invoked by the faithful during the struggle to rid Spain of the Moors. From the fifth through the fifteenth centuries, troops rallied to a rousing battle cry of "Santiago y cierra España!" ("James and close Spain!") He became known as Santiago Matamoros, or "Moor slayer," and was brought to the Americas along with all the other Roman Catholic saints during the conquest. 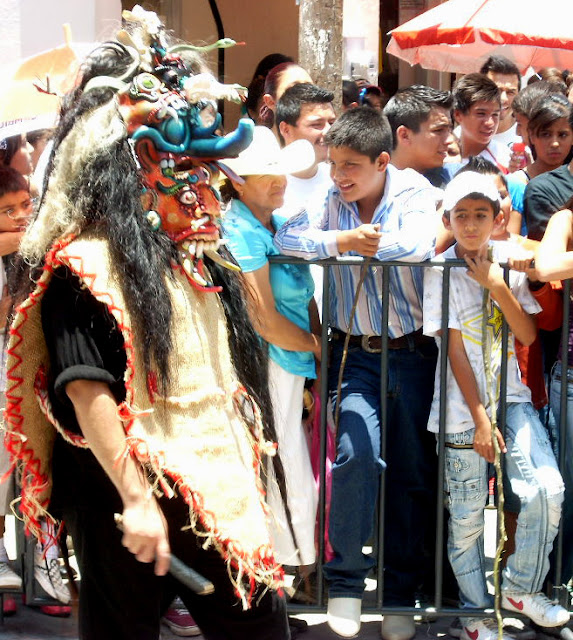 The dances may vary from town to town, but all utilize bizarre masks and wigs. In Jocotan, a former indigenous settlement on the outskirts of Guadalajara, the sound of clashing swords mingles with drumbeats and flutes as fighters on horseback make their way to the town plaza. There, good eventually triumphs once more over evil. 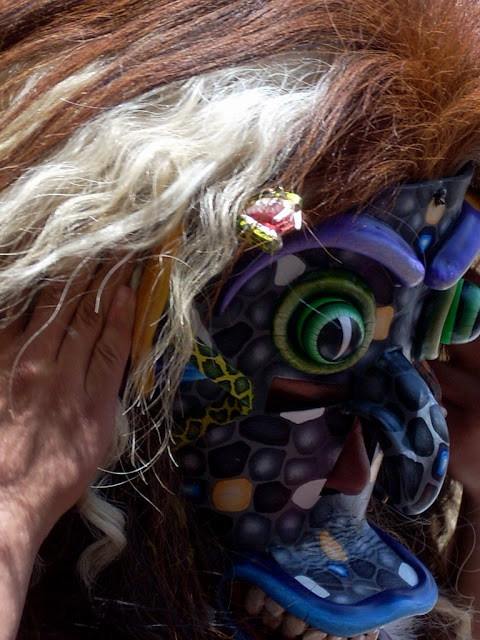 The odd surreal masks are strange and are the main element in this annual festival.  The masks represent human faces deformed by smallpox and sores, some of these features are also zoomorphic, meaning they have some characteristics of animals such as dogs, cats, wolves and are decorated with snakes, scorpions and spiders belonging to the region xictepetl (hill of the navel), now known as the hill of the queen.  This hill was where the battle between the Spanish and indigenous cultures took place. Some masks are painted as if they had injuries, they represent the blows of St. Santiago.  It is for this reason that the masks are an expression of pain.  The characters also have long hair, which is usually made of maguey fiber or horse and cow hair.  Also worth mentioning is that these masks are made by artisans from the town of Tonala.

The masks worn by Tastuanes are made of materials such as clay or ceramics in different finishes. According to tradition the masks must have representations of snakes, lizards, scorpions etc. 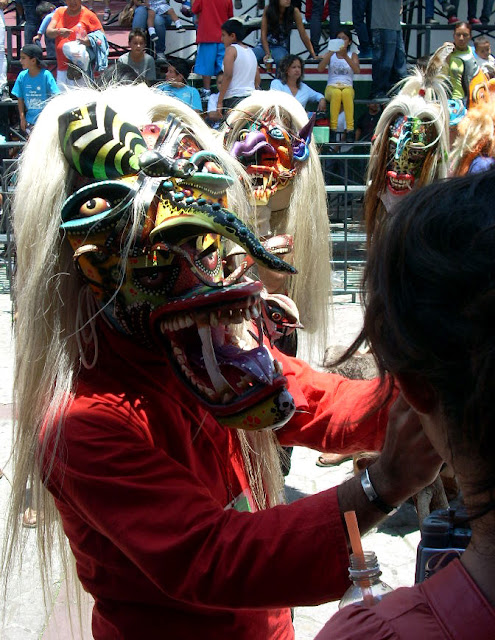 The Tastoanes are characterized by their cries, which become screams that cause the audience moments of anguish and fear. This dance is a dance that has been passed from generation to generation, although there have been some recent developments or changes in their clothing. Tastoane dances are accompanied by the flageolet (an Arabic musical instrument made of wood similar to the clarinet) and a ceremonial drum.

The members of this dance use their animal masks and costumes, which are composed of a green shirt, red jacket (garment-fitting, with skirts and long sleeves), trousers and boots. The person representing St James, is mounted on a white horse and wears a red cape, carrying a cross in his hand. Across his chest he also carries a sword.

The celebration of St. James is intimately connected with the dance of the Tastoanes. The flute and drummer are in charge of the opening acts. Tastoanera popular music is central to this celebration.  Without this music there is no Tastoaneada. 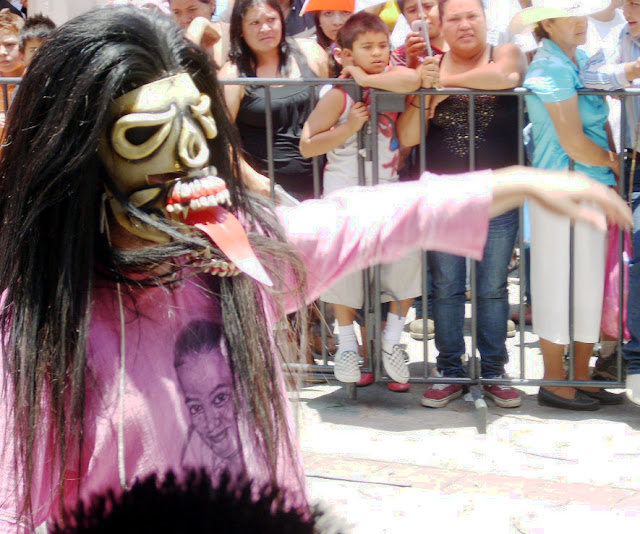 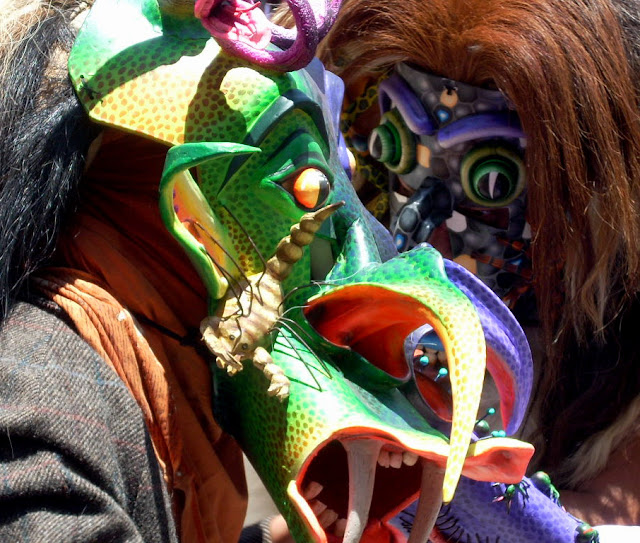 The Story:  The centuries-old religious tradition dates back to the arrival of the Spanish in the old kingdom of Tonallan.  The Indian queen, Cihalpilli, received the Spanish troops with open arms and willingly converted to Catholicism.

But a group of Indians less enamored with the European invaders and their religion banded together and rebelled, putting up a heroic fight on Tonala's Cerro de la Reina hill.  As legend has it, when their rebellion was put down they were turned into grotesque monsters known as "Tastoanes." 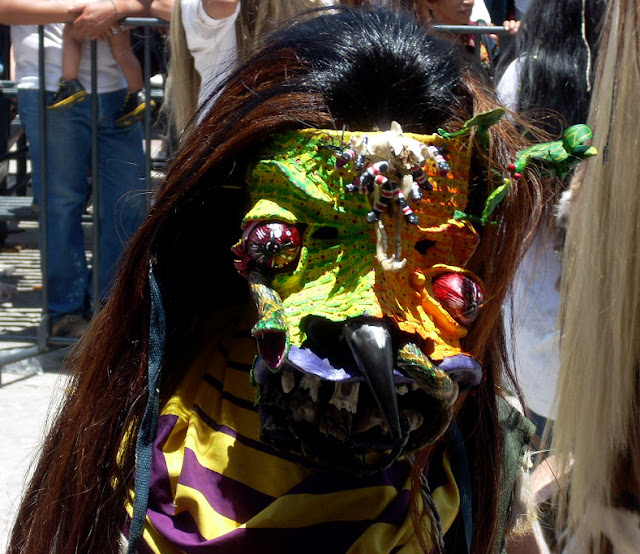 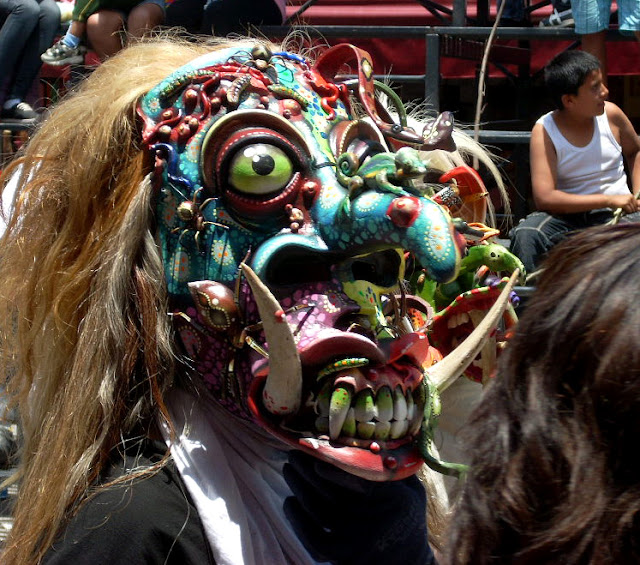 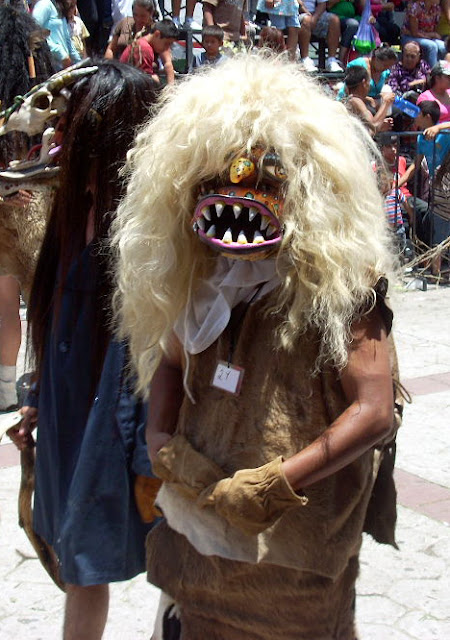 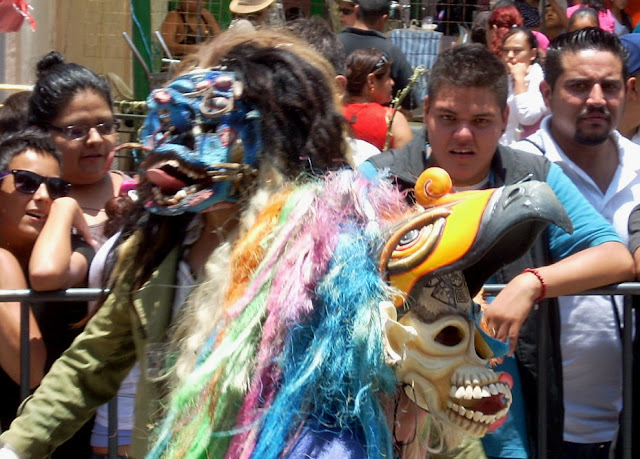 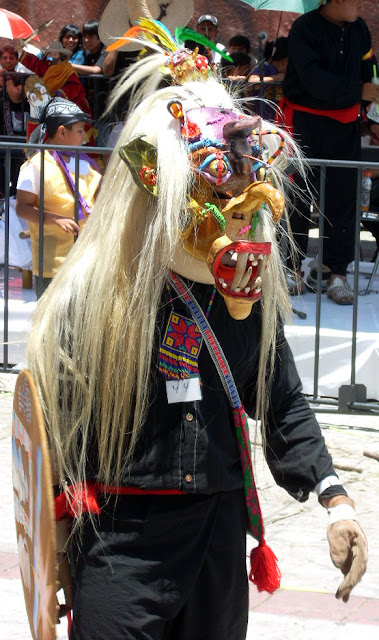 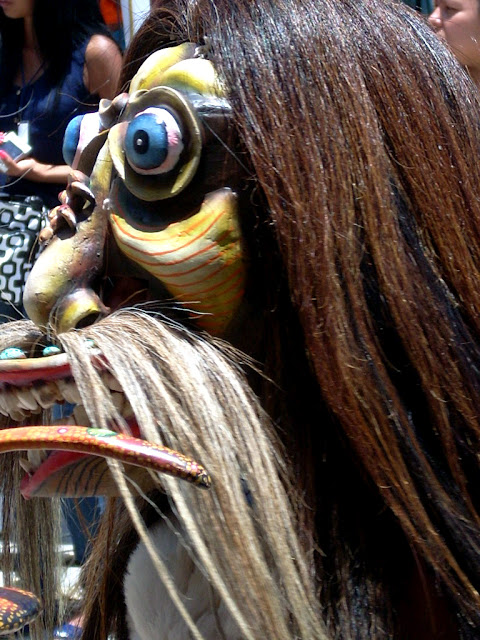 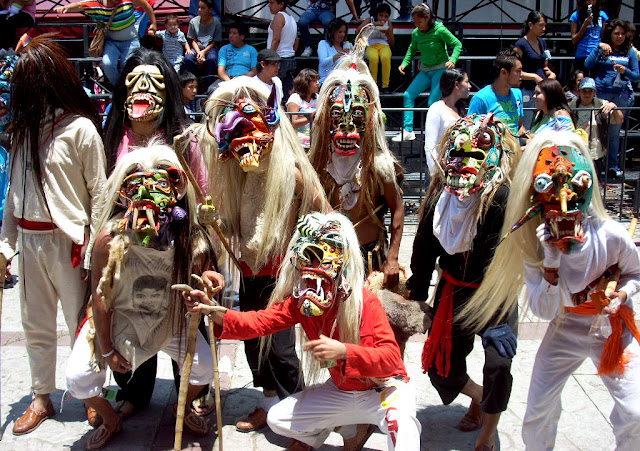 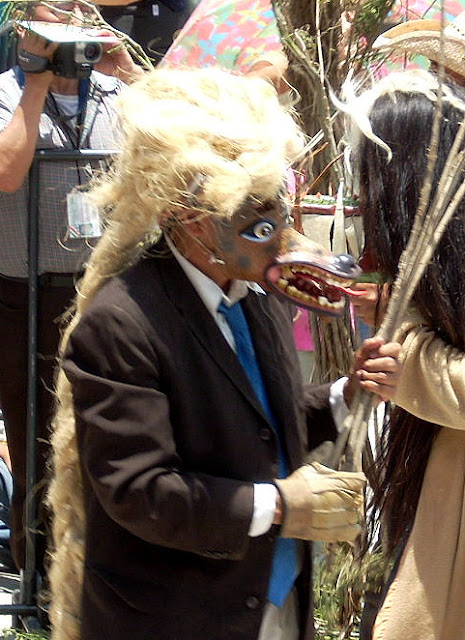 And as fate would have it,  the Aztec Dancers came along for the celebration, not wanting to miss an opportunity to express themselves. 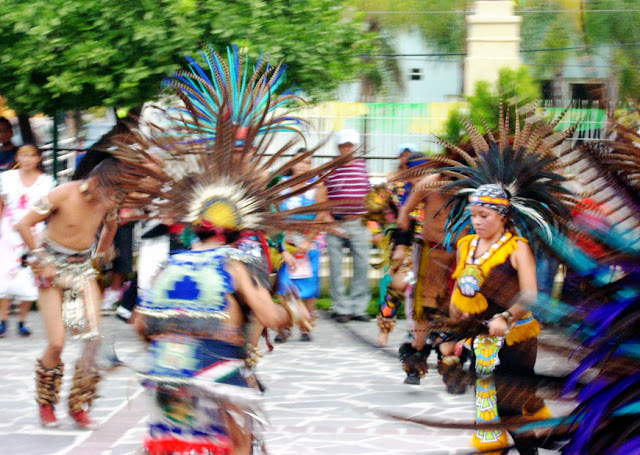 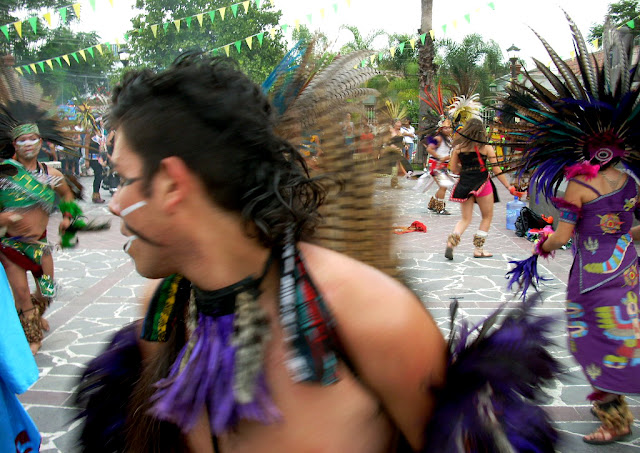 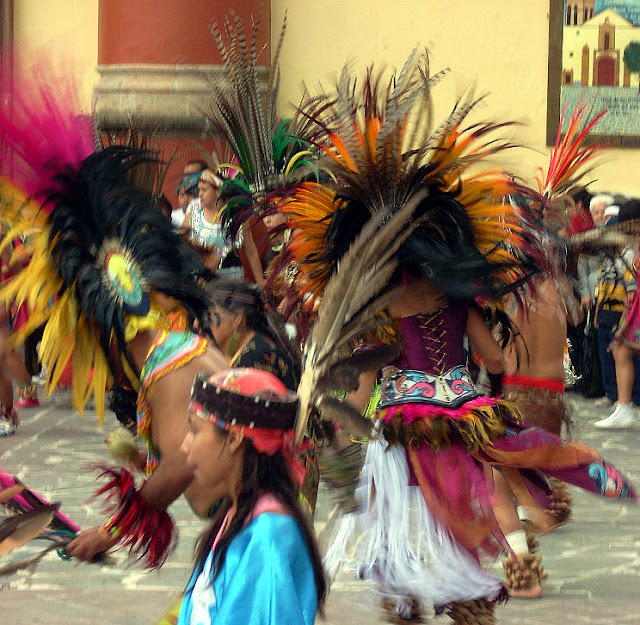 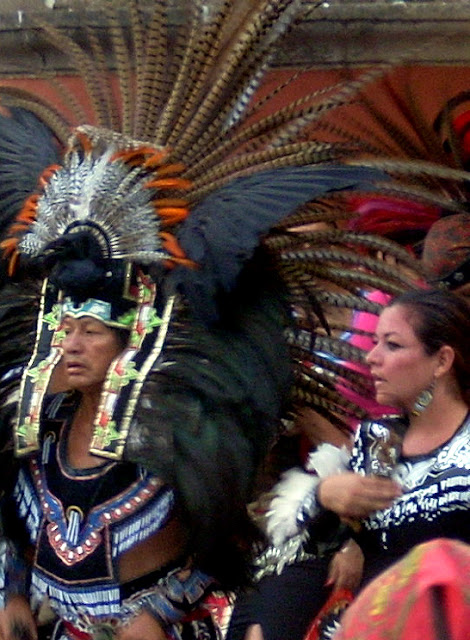 We also took in the exhibit "Mundo Tastoan" at the Museo Regional de Tonala.  This exhibit, set to coincide with the Tastoan Dance celebrations, was an exhibit of Tastoan masks. 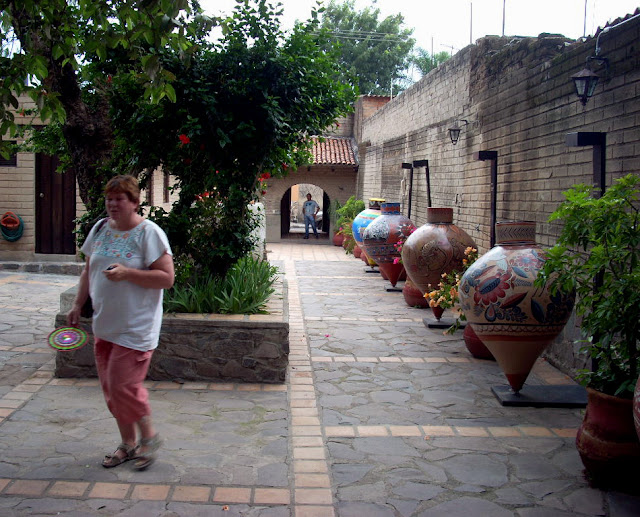 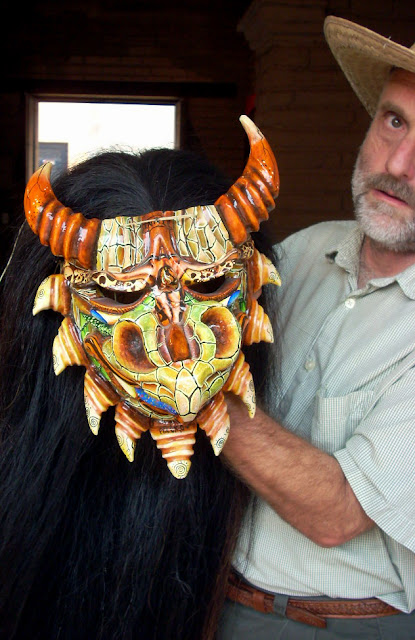 Brad is given a Tastoan mask to handle 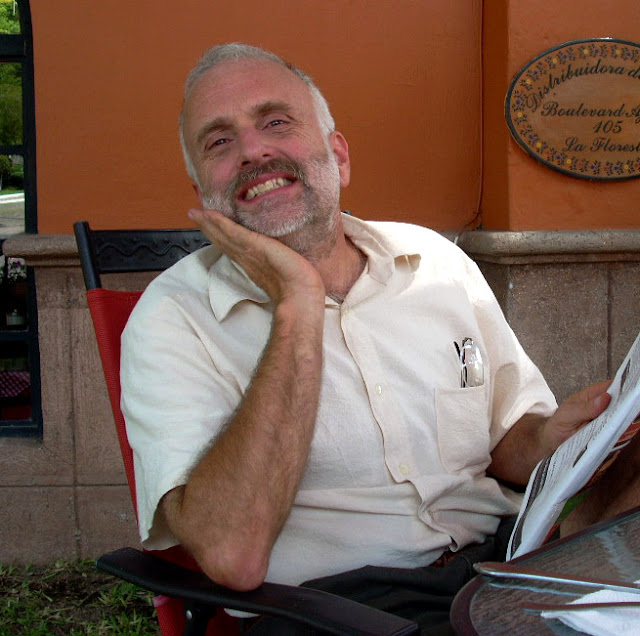 Life is good lakeside
Posted by Art Xik Xik at 10:06 AM