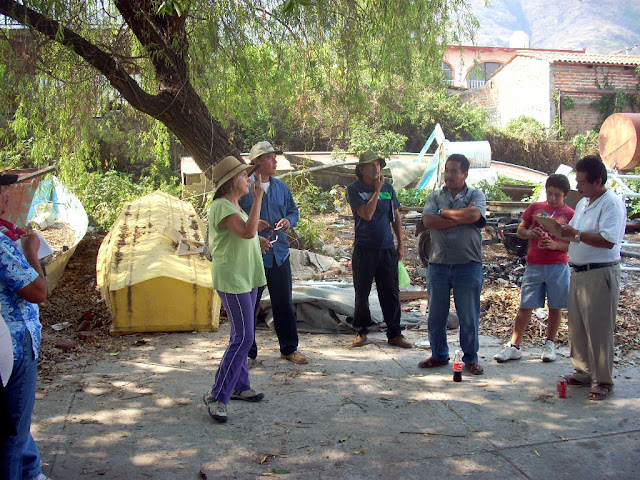 One of the reasons I moved to the Lake Chapala area was to become involved with sustainable, ecological projects and practices in this lovely area.  My journey led to me to Dr. Todd Stong, a pillar of the ecological community, invested and impassioned with and by the natural beauty found here.  His contact, when he is away from the area, is an amazingly bright, beautiful, sage and dedicated woman named Karuna.  I was fortunate enough to connect and meet with Karuna on Thursday May 17th, 2012.  And this being Mexico, and magic happening all around me all the time, of course, I would find myself on a small boat the next day leaving the Lake Chapala shoreline to experience first hand the Aguaculture project just off of Mezcala Island. 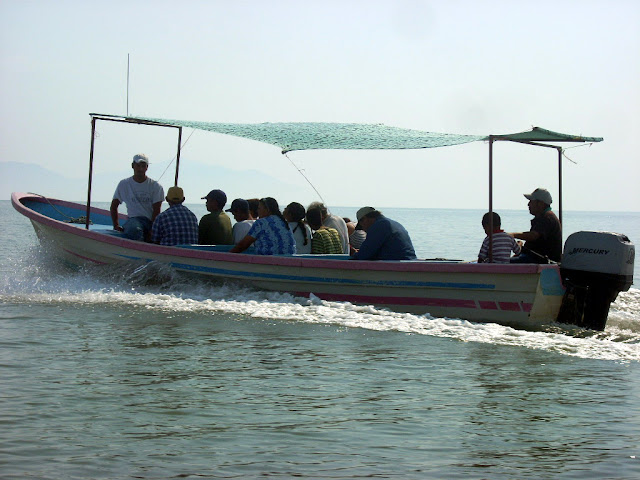 Brad and I were invited to witness firsthand, the overview coordinating efforts of biologists Kurt and his assistant, Domingo teaching interested local fishermen and local residents the ins and outs of the project.

Imagine 10,000 new jobs in the impoverished villages around Lake Chapala. This dream is now evolving into possibility as a six-cage pilot project in fish farming (aquaculture) near Mezcala Island and is creating the essential operational and environmental guidelines. 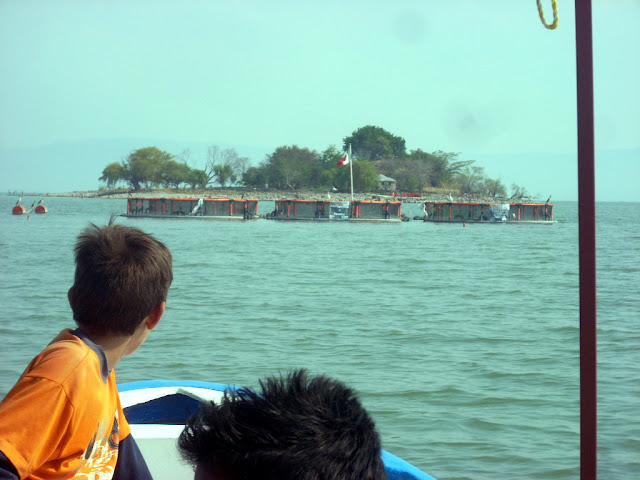 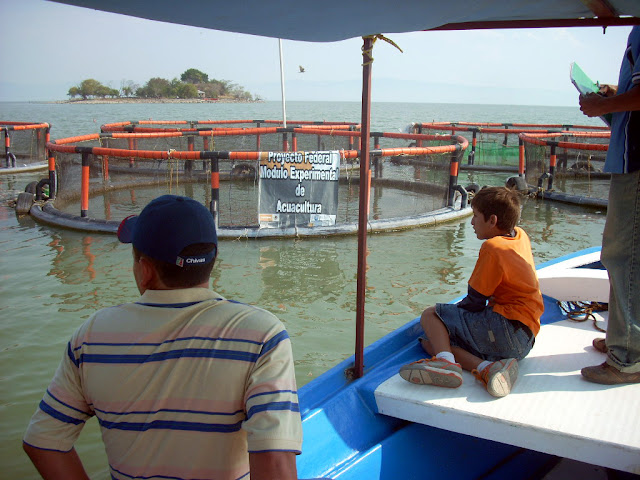 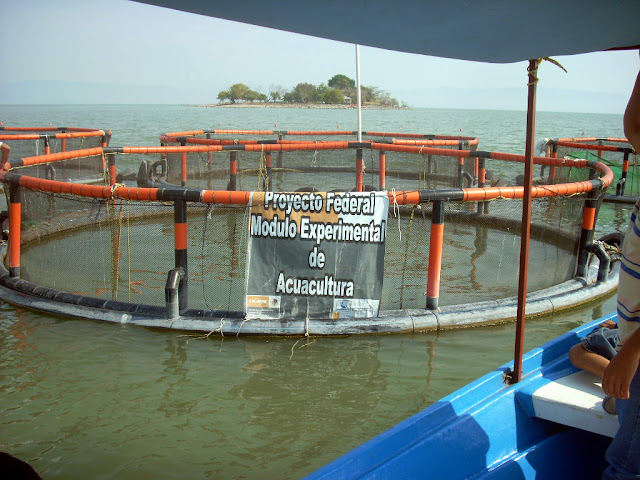 After observing the high density, destructive practices of aquaculture as it evolved these past 20 years in Asia, The Aguaculture project has adopted half a dozen important changes. Their 20-foot diameter floating cages with nets seven feet below the lake have over eight feet of flowing water below them. Gentle, deep water currents, with varying direction hourly provide changes of the water 300-600 times a day in the cages. Compare that to fish raised in tanks which see only one water change each three days. Further, with 4 cages per acre (10 per hectare) the project provides 97% open water about each group of cages. By the monitoring of 22 chemicals and biological factors the project sees the starters throughout the five months required to raise a batch of fish.  They are coming to understand exactly how the algae, plankton and other forms of life in the water naturally digest fish waste, a normal component of the eco system. 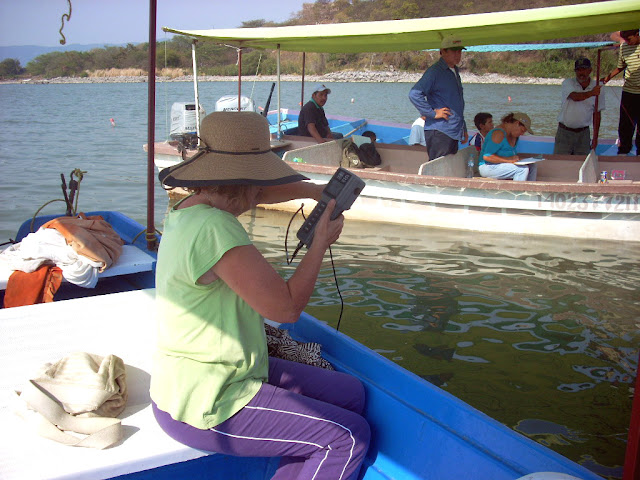 Tilapia, a vegetarian fish that can convert 1.5 pounds of grain-based feed into a pound of flesh, is the choice for our lake. By comparison cattle must be fed eight pounds of grain to produce a pound of beef. Or, consider salmon, a carnivorous fish, which must be fed up to five pounds of other fish to produce a pound of flesh. With 7.2 billion people on Earth, we must move towards efficient fish for animal protein and we must focus on fish, such as tilapia and catfish, which thrive on grain. In addition, the waste of tilapia floats so it is easily digested biologically and back into the cycle. 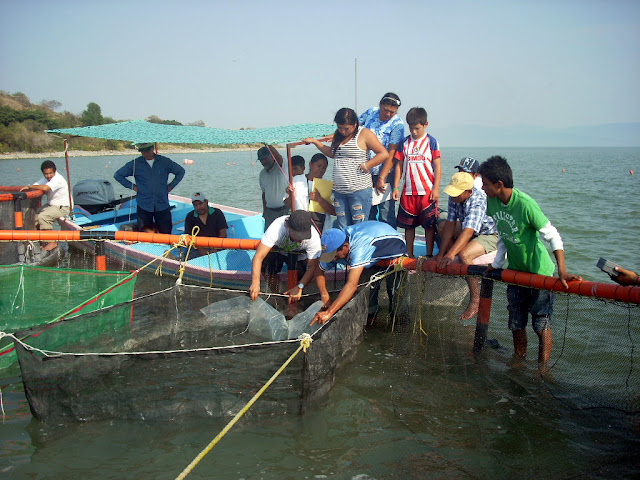 While man began the farming of chickens, pigs, and cattle 5,000 years ago, or more, only in the past 50 years has the serious farming of fish finally begun. During the past 30 years, stocks of ocean fish all over the world have been trending downward due to over fishing. Realistically it may not be possible for governments to control the excessive taking of the wild fish. 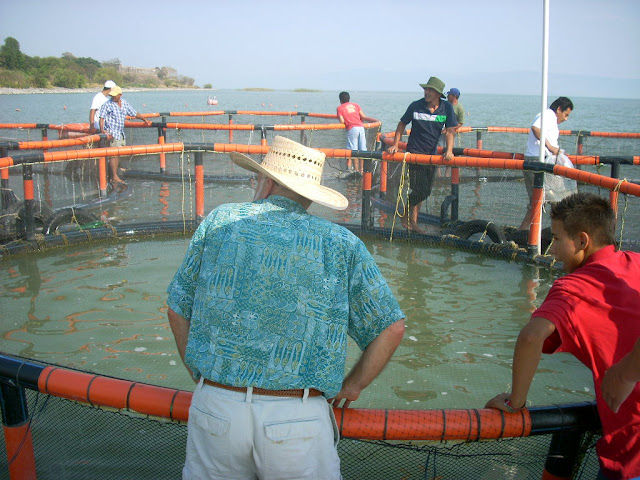 Starting in 2009, over 50% of the fish consumed in the world each year have come from the emergence of aquaculture. In our own Lake Chapala we have seen a reduction of fish resulting in a fisherman’s daily catch being cut from 130 pounds to now less than 20 pounds per day. The annual yield of 12,000 tons from the lake has dropped to 2,000 tons. It would require the placement of over 6,000 of these cages in the lake before the number of grain-fed fish matched the reduction of 30 million wild fish from our lake. The yield from those cages could annually provide nearly 50 tons of grain-fed fish which could be sold for $1.09 US/lb versus the ever-smaller wild tilapia fish from the lake that sell for about $0.33 US/lb. 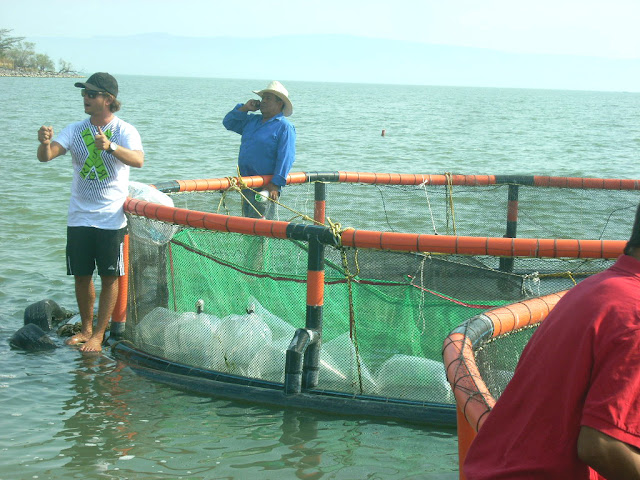 
Imagine further, if the 2,600,000 acres of lakes and reservoirs in Mexico were to support aquaculture. Consider that if just 1% of the area of these lakes and reservoirs were opened to this activity as per our model here at Lake Chapala that up to 500,000 direct and indirect jobs could be created in this nation. 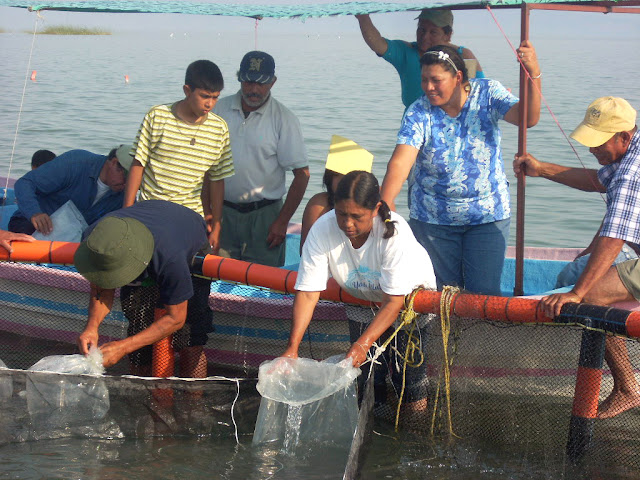 And given job poor Mexico has only a 10% stake in aquaculture while the world average is 55%, and given that the focus of Mexico’s effort is on the ocean coast, this proposed project offers a low risk method of bringing this industry to the interior of the nation. In partnership with a junior college like school in Jocotepec fish will be raised from the egg stage to 50 gram size in 2 months. They will then be transferred to 15 floating cages in the lake near to San Juan Cosala for 4 months feeding to bring these fish to a 500 gram weight. The immediate plan is to produce 12 tons of tilapia each month. The longer range plan is to create 30-40 of these village based floating fish cage operations on the lake so as to create jobs that will keep youth from leaving their villages. Federal government wishes to support this pilot effort and is expected to begin funding about July. Planning continues. 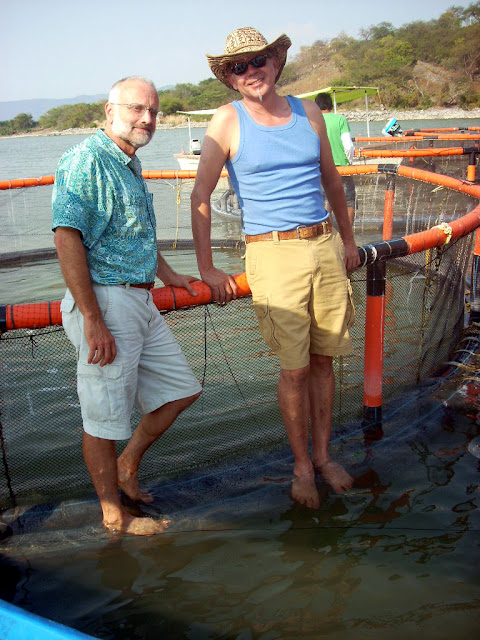 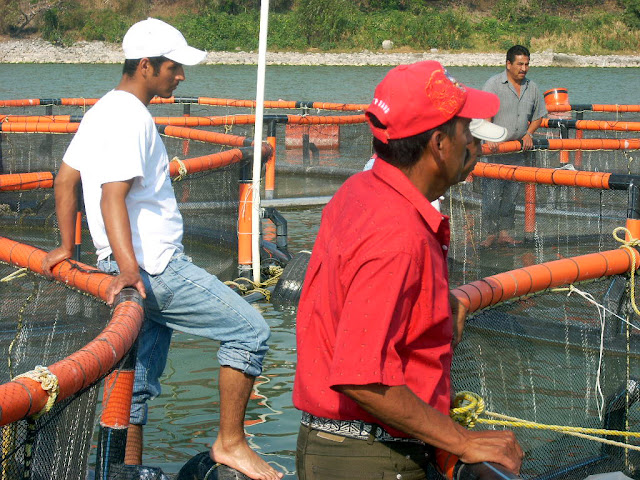 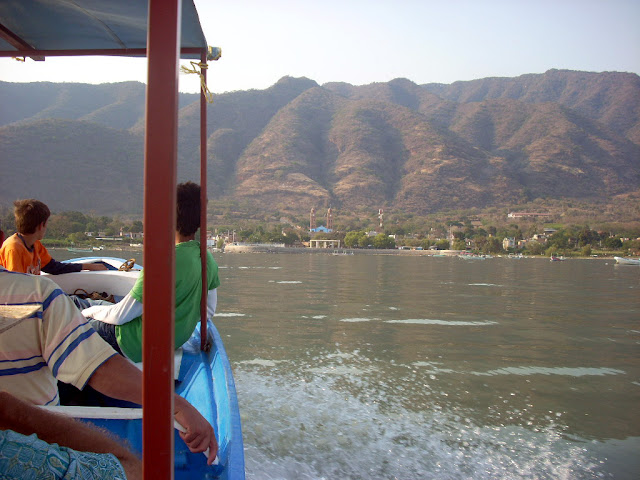 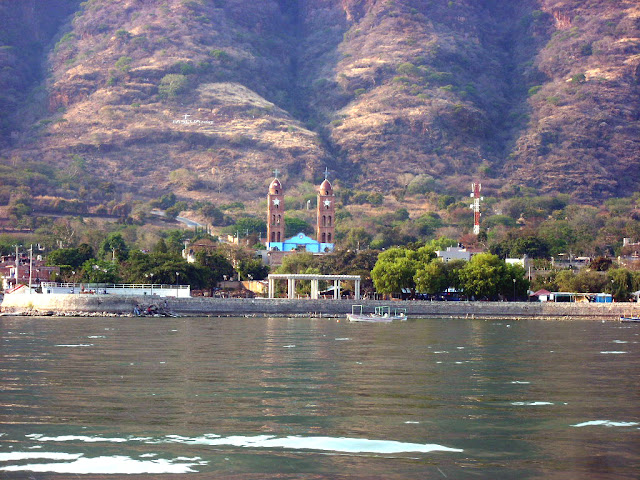 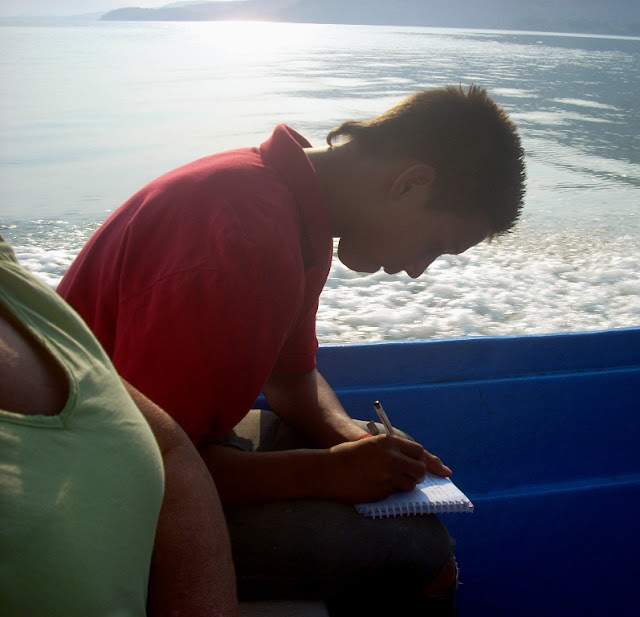 On the boat trip home, one of the young men, who did not have money for transportation to the class, but who did arrange a ride to the class, was studying his notes.  This show of dedication to learning, to doing what was necessary to take advantage of this unusual opportunity, epitomizes the will of my people, the ability to overcome adversity and to supercede immediate challenges to reach the goal of improvement of self and ultimately of pueblo.

My journey here in the Lake Chapala area has just begun.  But I feel confident that I've landed in good hands.  With the experienced advice and guidance of Karuna and Dr. Stong, how can one go wrong? 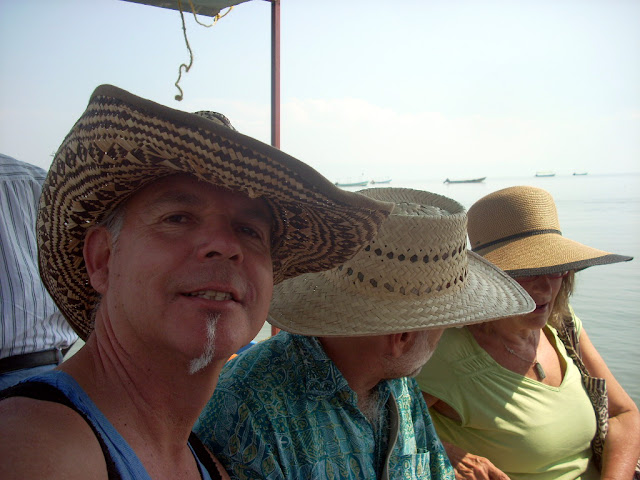 Another project of note and interest is the Tlachocilco Water Project...Low priced (5 pesos) bottled water system to be operated by the women of the 700 person Tlachochilco Village. It will be a first in Mexico and perhaps the model for 30 million more rural village people. The site is 11 km east of Chapala, 25 minutes from Ajijic. At the request of the village we are building a structure resembling a church, the “home of the precious water.”  The project is into its 25th day of effort with 3000 bricks, 100 meters of pipe and much concrete placed.

The village now has a water system for filling the 5-gallon drinking water bottles whereby the people can buy them for 5 pesos instead of 20 pesos, saving each family 4000 pesos/year.

This project has yet to mature, but shows great promise.  I will visit the village of Tlachocilco soon, to see what I can offer in the way of assistance....more soon!