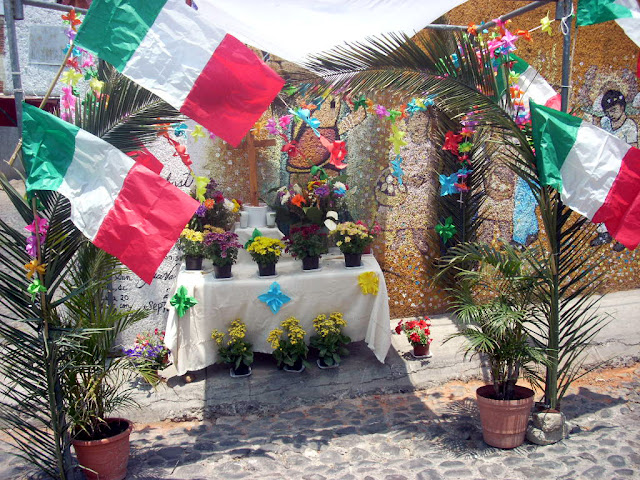 Dia De La Santa Cruz -  The holiday is observed with special fervor by the nation's construction workers. Local crews traditionally adorn a wooden cross with paper flags, flowers and streamers and place it at the highest point of the building site before settling down for lively fiestas featuring food, drink, music and fireworks that often run into the wee hours.

A May 3 custom peculiar to several Ajijic neighborhoods referred to as "levantando la cruz" (picking up the cross) is vaguely akin to the North American Indian potlatch. As dusk approaches scores of families in the Seis Esquinas area and upper Ajijic's Barrio de San Sebastian set up altars on the doorsteps of their homes, placing a cross in front of draperies and surrounding it with natural and artificial flowers, candles, food and pantry staples. The shrine is laden with a generous offering that includes heaps of fresh fruits, loaves of bread topped with white frosting and red sugar, and a variety of other goods for stocking the larder. The most elaborate spreads will contain a torito, a bamboo structure fashioned in the shape of a bull and studded with firecrackers.

Once evening falls, crowds of villagers will show up to view the displays. The offerings may be reserved and later hauled away free for the taking by anyone who so wishes. The sole condition for taking the loot is acceptance of a gentleman's agreement to return the following year to replenish the bounty in an equal or greater amount than received. 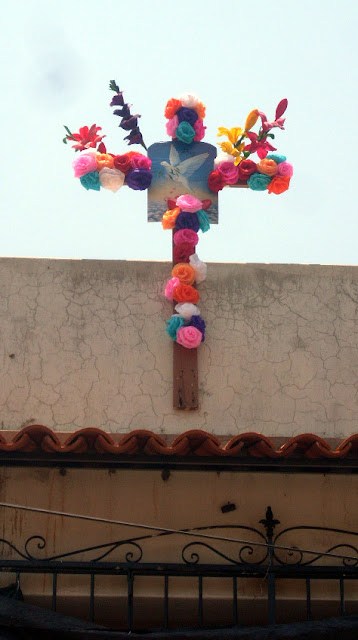 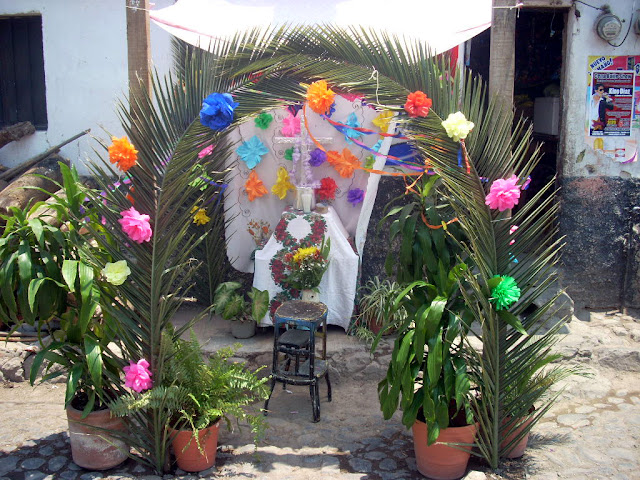 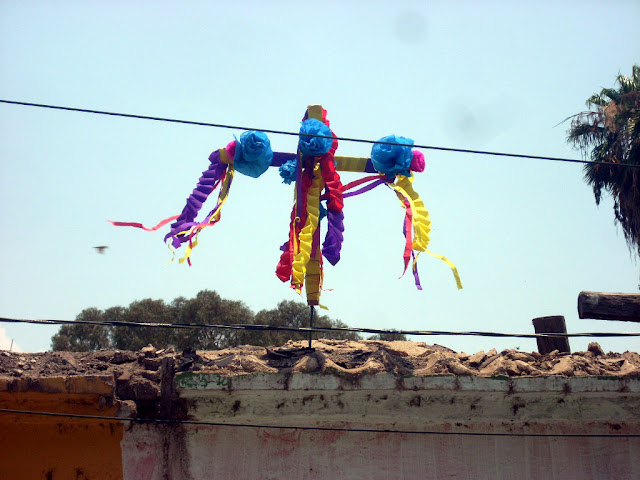 Today is my little sister Alice's birthday and the first thought I had as I awakened was to call her and wish her a lovely day.  As we are 2 hours ahead of California here in Chapala, I thought I'd be sensitive and not call too early.  So instead I focused on our day, which started with oatmeal, blackberries, nuts and a discussion about how to best spend the day. 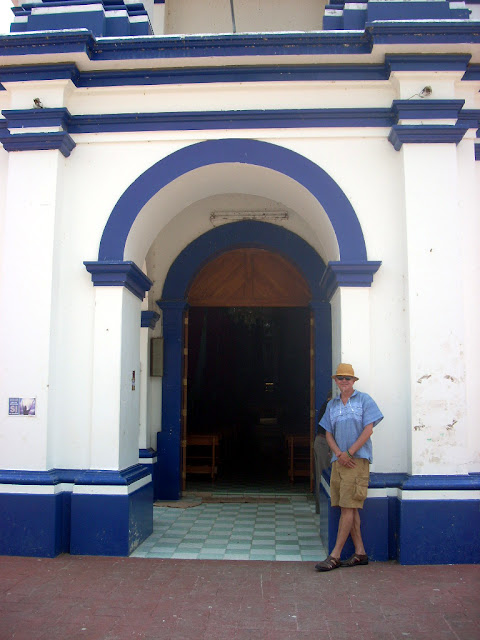 We had tentatively planned to take the boat from Ajijic to San Luis Soyatlan, across the lake, and then a taxi to San Cristobal de Zapotitlan to look for baskets.  Over breakfast, I  realized that the boat trip might cost more than driving our family van, and if we took the automobile we could stock it with treasures, which we would undoubtedly find and then not have to hand carry all our goodies all day...so into the car we piled, toward Jocotepec, onwards to the south side of the lake.

We drove around the lake and soon arrived at the small town of San Cristobal de Zapotitlan.  We knew there was an artist's cooperative in the town and, asking around, found the Taller De Artesanias De Palma y Hojas De Maiz. 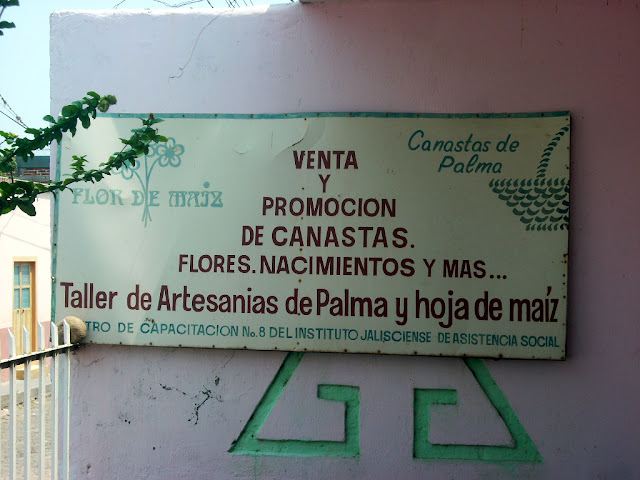 Thirty artists, all from San Cristóbal, have formed a cooperative to produce and sell the palm baskets and corn husk dolls they make.  We met María Florentina Osorio Rito at the cooperative store.  She asked us to call her Flor. 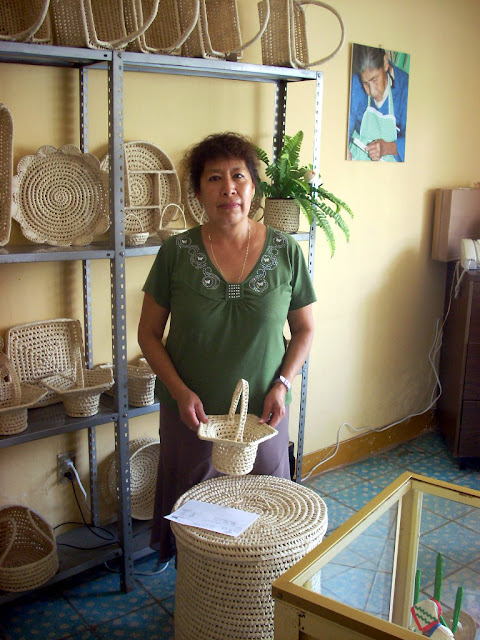 Flor explained how the cooperative worked, that everyone worked and contributed product that was sold in the store.  Flor helped us select a beautiful palm basket that we had been searching for since we arrived in the area a month ago (Has it really been a month already?)!  We also found a perfect square basket for Brad's wallets and bookmarks, which will soon be for sale in Ajijic. 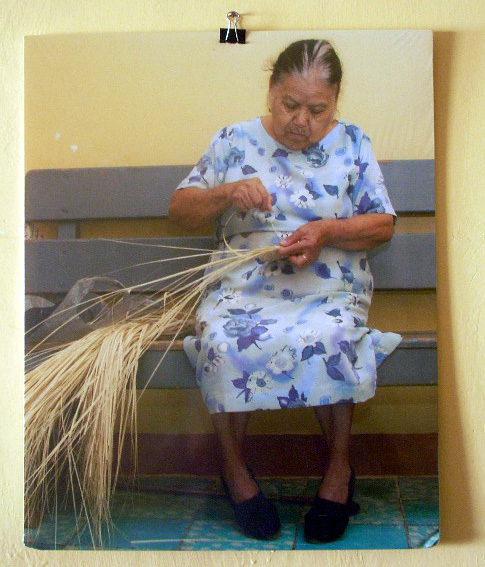 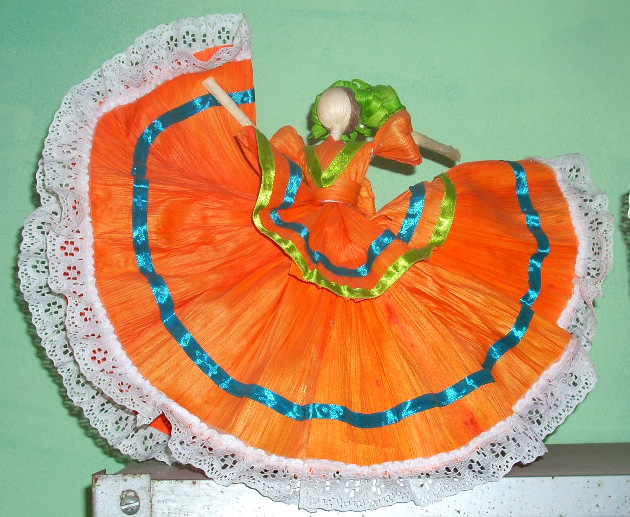 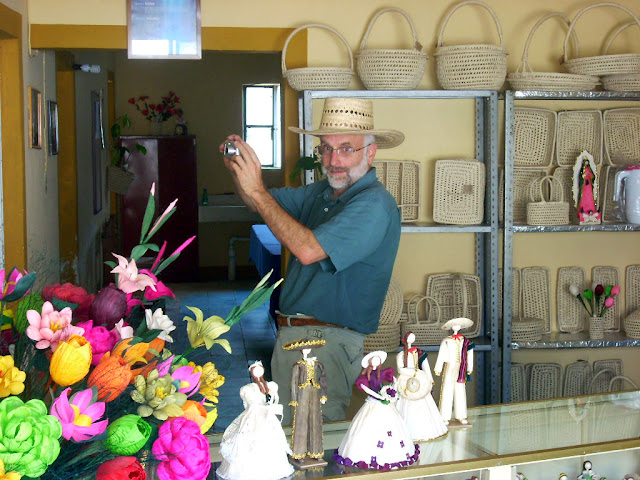 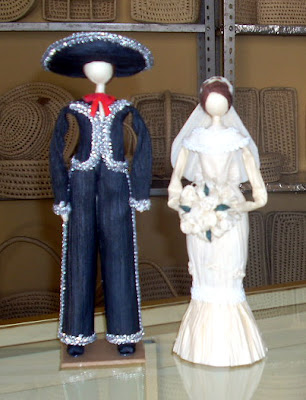 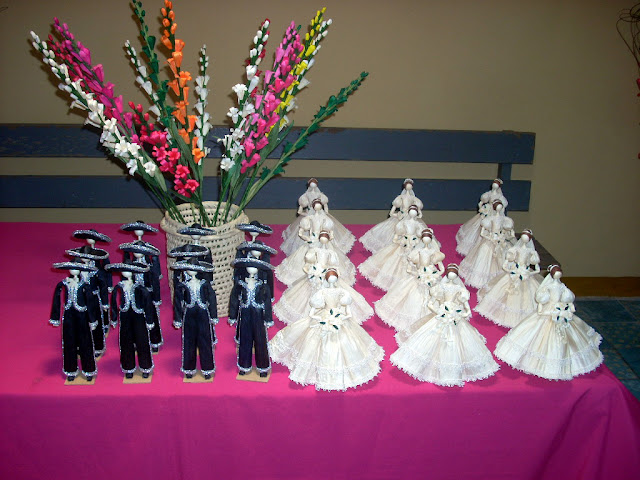 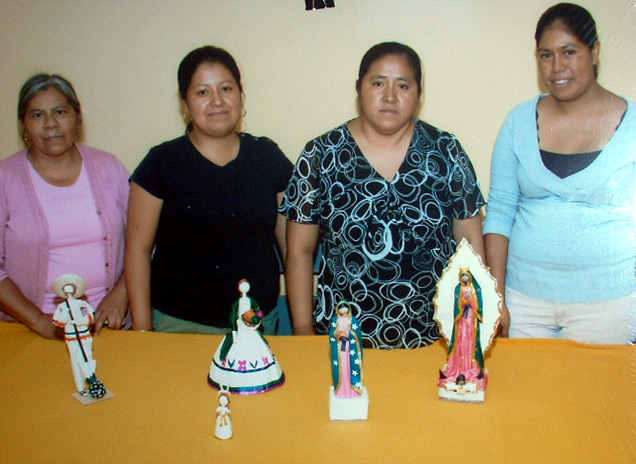 The Artists And Their Work

We had seen some reed woven works in Ajijic and Chapala, but none using palm and none done this well.  I asked Flor if they sold their work in other towns.  She stated that on certain festival days they would take their product across the lake, but otherwise their store was the only place to purchase their product.  After having seen and purchased a few items, both Brad and I felt honored to have met Flor and seen the Cooperativa store.  The work was excellent and well work the trip.

So of course, after having traveled and shopped for a bit, it was time for comida...and we had read about a place in San Luis Soyatlan, which was the town just down the road from San Cristobal de Zapotitlan.  We actually drove right past the Posada Restaurant at Los Crotos the first time...turned around and anxiously walked to the open front door.  At first the place looked closed...at least the chain and lock on the front gate seemed to say so.  We were turned around and ready to leave and drive somewhere else when I noticed a buzzer...so I buzzed.  A gentleman asked what we wanted and I said food....he didn't seemed phased...and unlocked the gate. 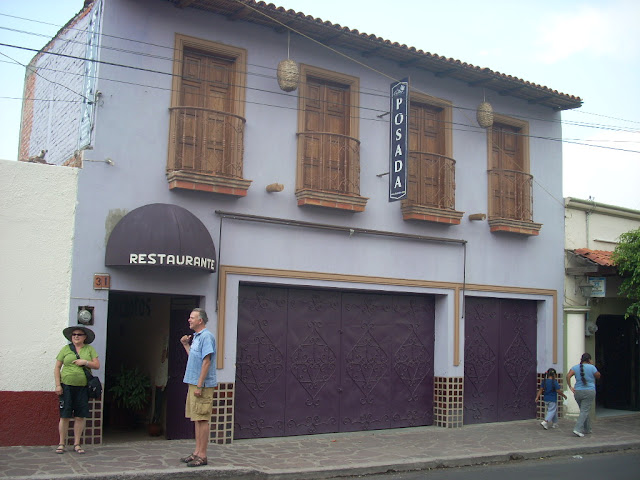 We were ushered to a beautiful garden dining area at the back of the Posada. 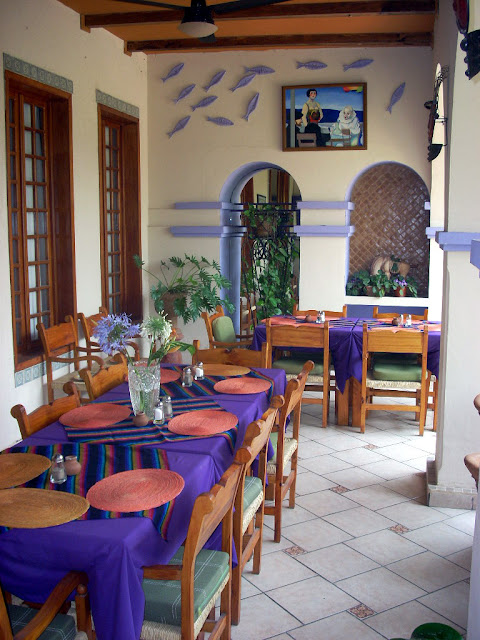 The owner of Los Crotos, Arturo Aceves greeted us as we entered the dining area.  I told him we were interested in the Posada and comida...he asked which I wanted to see first...and I said comida. 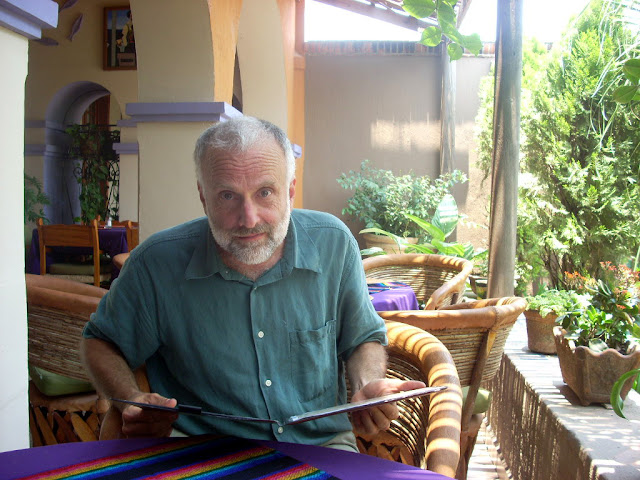 Seated and ready for lunch. 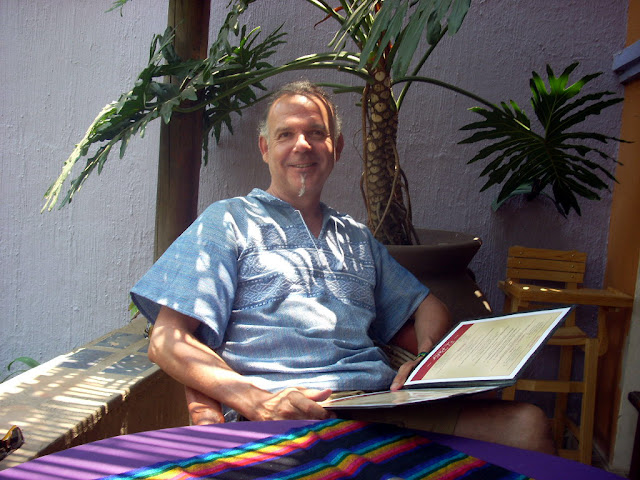 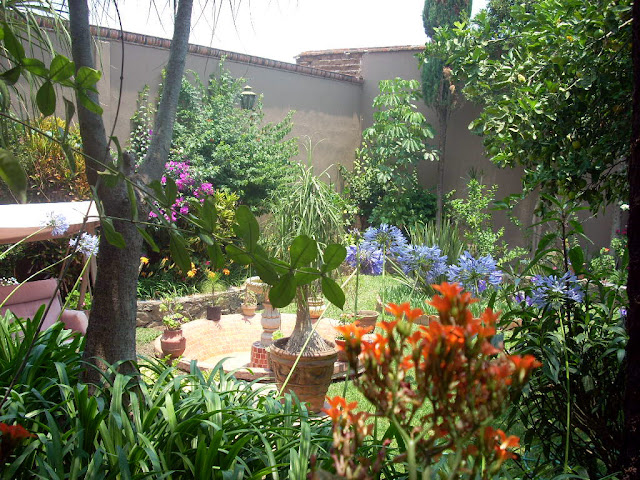 Beautiful Garden Off The Dining Area 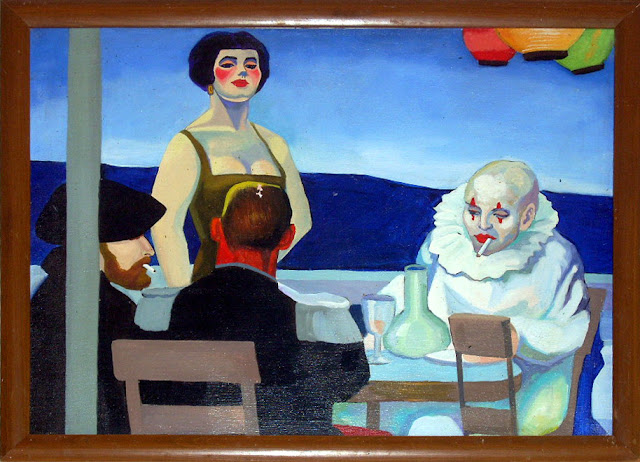 As we settled into our table for the afternoon I found myself in an oasis of sensations.  The eclectic, well selected music wafted through the space.  The visuals all seemed to work toward soothing the tired soul.  The color palette calmed the inner beast....almost to a purr.  And the food delighted the taste buds almost to a point of celebratory dance.  And then there was the point of our being the only guests in the restaurant...what could be more delightful?

We ate and daydreamed, our minds drifted away and returned sated.  And our pocketbooks were none the lighter for having dined well.

Sometimes you need to take detours to find the road to your soul.  If we never leave the well worn path, we can't discover the magic beyond. 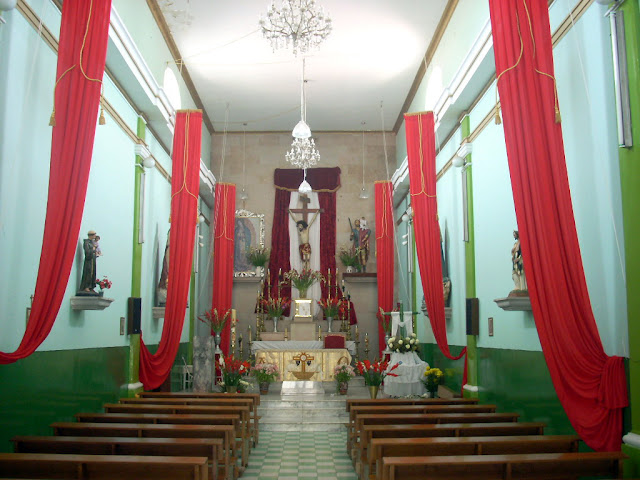