From the earliest memory of Mexico, smoke or humo rises.
It laces itself into your being...the aroma invading your clothing, encircling your heart and piercing your soul.  Humo is part of the Mexican landscape and it is hard to escape it if you live here.  If arriving via airliner then driving to the city of Guadalajara, one is treated to a smokey, lingering layer from local fires lightly settling
on the lirio marshes surrounding the airport.

If arriving by motorcar, one is enticed by the scent of roadside fires.
With a bit of imagination you could envision
an indigenous roadside ritual residue. This morning a smokey glaze laid over the Lake of Chapala.   The layer appeared to be more of a haze than smoke, but the effect was the same nevertheless...beautiful hued layering on the mountain ranges, a mysterious opaque screen across the water. 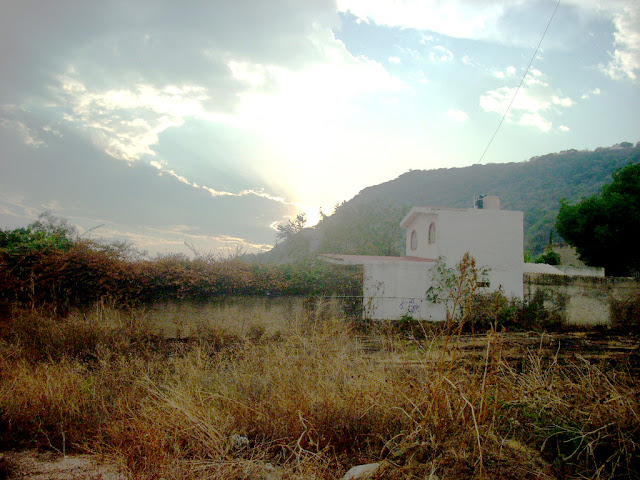 Today was Friday and we were heading to the big city....Guadalajara...to shop for some needed items that could not be bought lakeside.  We have a love/hate relationship with Guadalajara.  We hate the traffic, the hectic pace...but love certain things about Mexico's 2nd largest city.  One of those love things is the Casa De Las Artesanias at Parque Agua Azul.

Also known as the Instituto de las Artesanías Jaliscienses, the large exhibit and sale space is installed and located in the land/area of the Parque Agua Azul.  The Casa has as its objective to conserve, protect and promote the Jalisciense artesanias. The building was inaugurated on September 7th, 1964.  In the Instituto de la Artesanía Jalisciense one can purchase an extensive, excellently chosen array of artesanias from all over the state of Jalisco.  Objects such as ceramics, blown glass, weavings, tin work, steel work, paper maché y silver work, as well as wood carvings, bone carving, Huichol art, iron work and clay figures from Tlaquepaque can be found there. 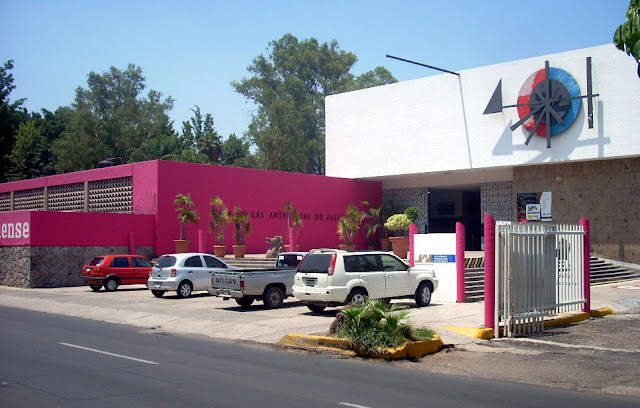 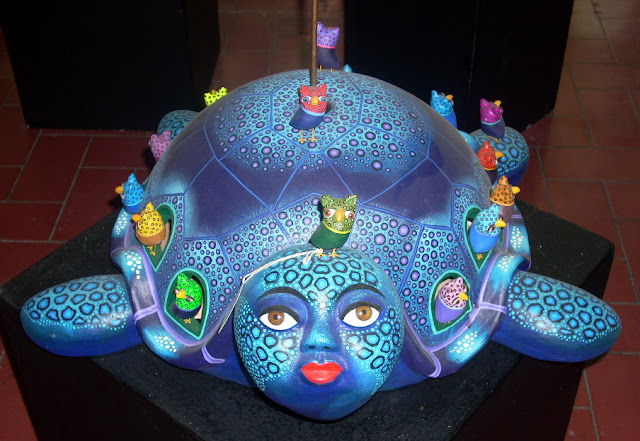 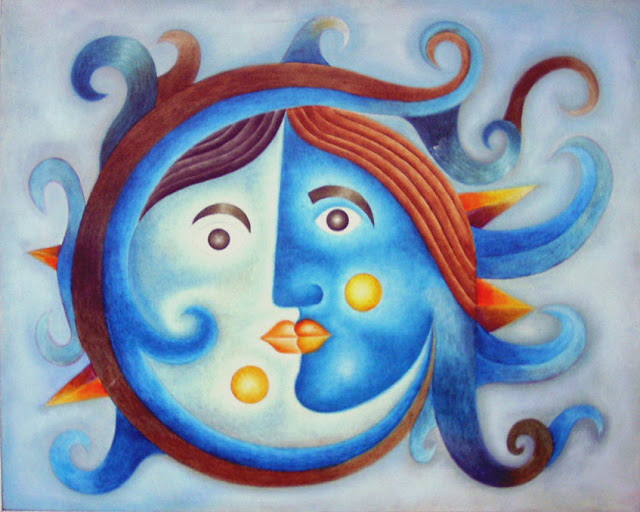 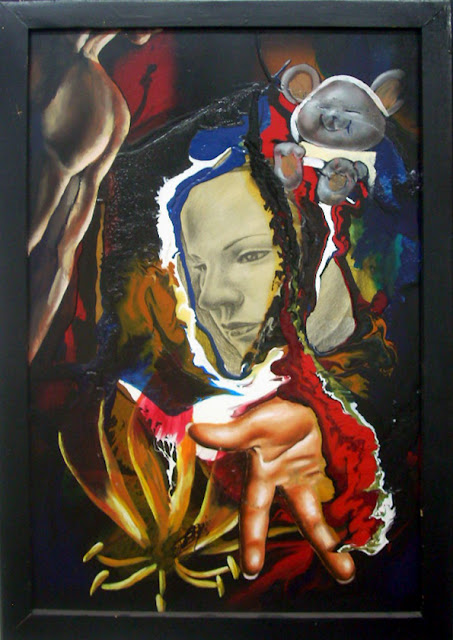 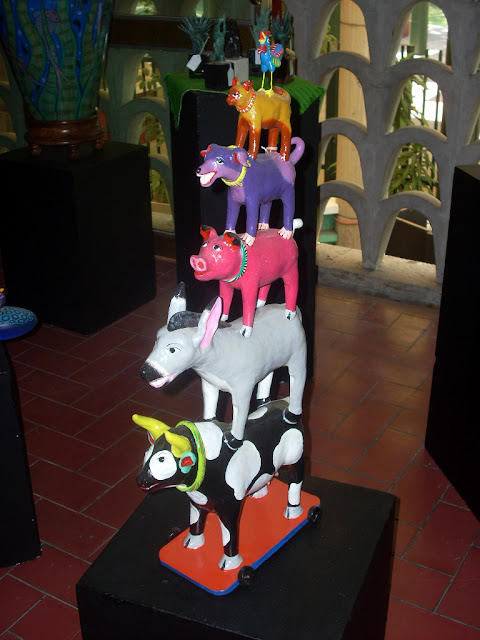 After enjoying the treasures of artesania at the Casa De Las Artesanias, we strolled next door to the Parque Agua Azul.  My grandfather used to bring me to this park when I was a child.  Way back then, it was known for its caged animals, so we called it the zoo.  At the time, the city of Guadalajara did not have a proper zoo, so the Parque Agua Azul was it.  The animals have mostly been moved to the new zoo location, but we did see an amazing Butterfly Pavilion and Aviary. 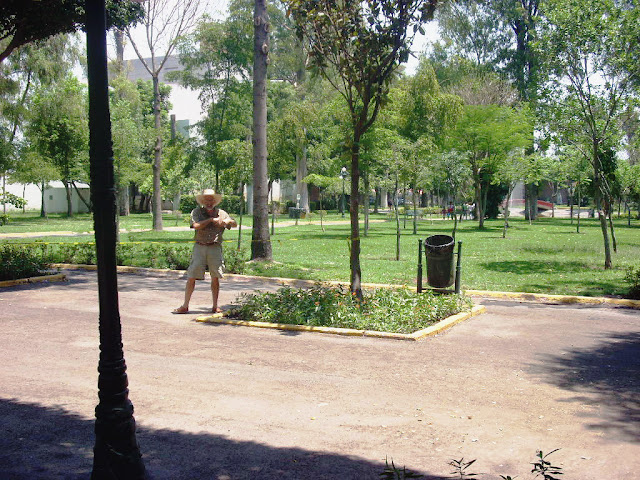 Brad at the milkweed planter in Paque Agua Azul 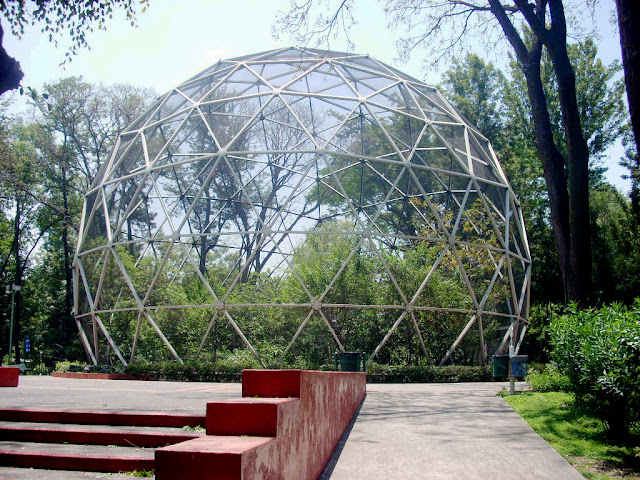 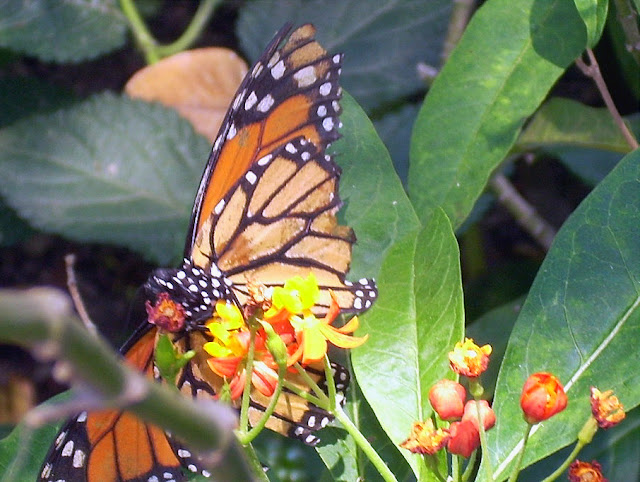 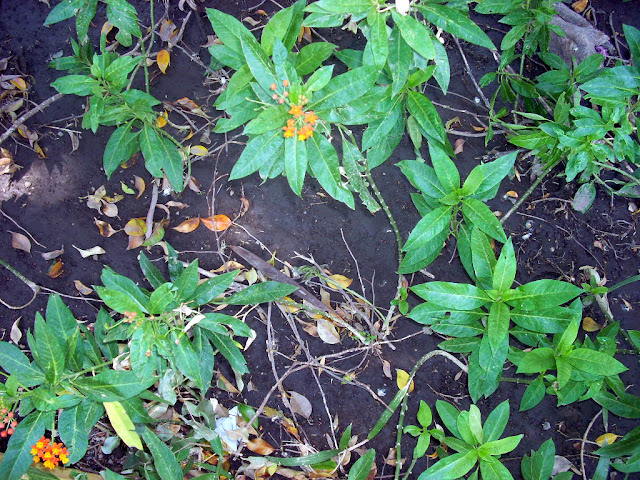 Milkweed...after seeing how many butterflies were around this plant, we decided to have
a whole wall full of Milkweed in our new home. 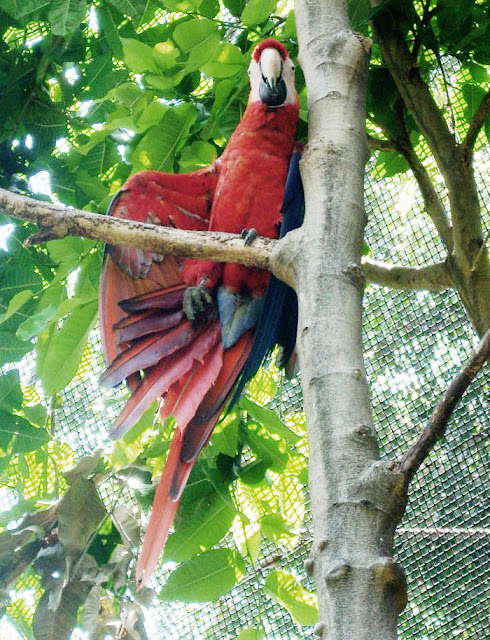 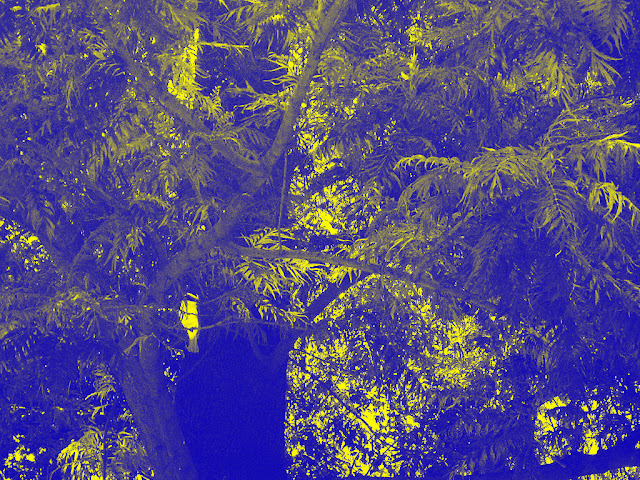 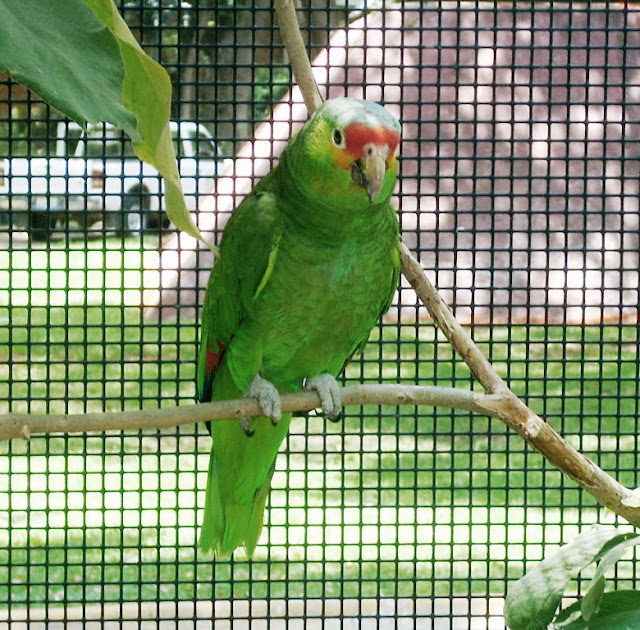 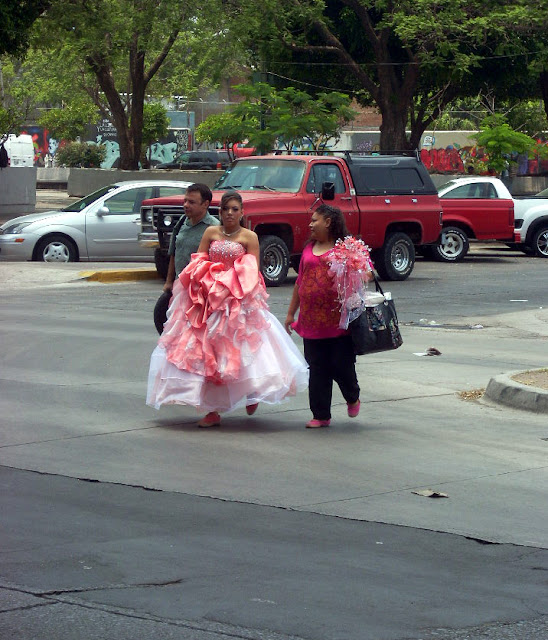 The Parque Agua Azul is a destination stop for wedding, birthday and Quinceniera
fotos...and we were not at a loss of photographers and subjects today.  I love the gown and
especially the color coordinated tennis underneath.

After strolling thru the Parque we headed to the center of the city to do our shopping.

We crossed one of the major boulevards of the city...The Calzada Independencia...a large champs that goes through the entire city from east to west. 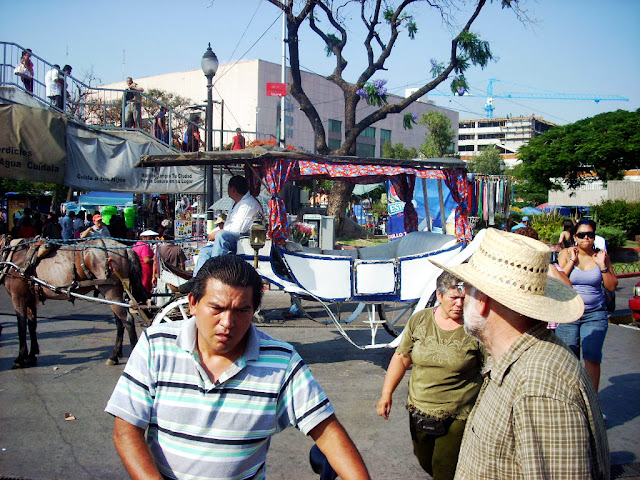 Our destination was right off the Calazada Independencia....the Mercado San Juan de Dios,
also know as the Mercado Libertad.

Mercado Libertad, better known as Mercado San Juan de Dios (San Juan de Dios Market) is one of the largest indoor markets in the country with an area of 4000 m².  The market was inaugurated on December 30, 1958 and was designed by the architect Alejandro Zohn. 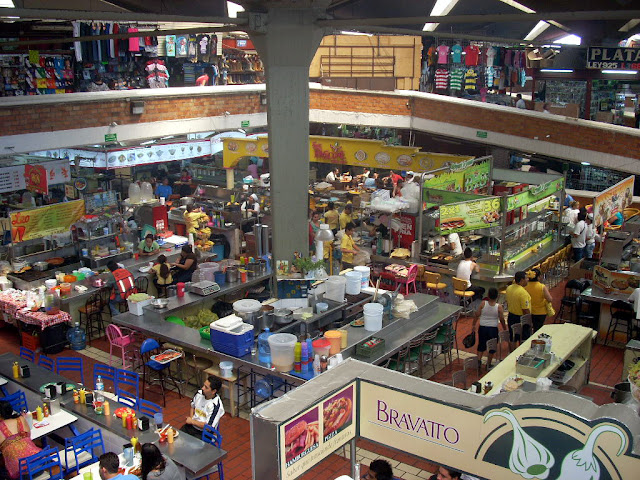 We spent the morning shopping for an electric adapter, CD-R disks for Brad's classical music, leather sandals, as well as medicinal herbs at a local botanica, all the while feeling overwhelmed with the size and breathe of the market.

After a full morning of shopping (which is way more than we usually can handle) we headed to one of my favorite restaurants in the centro area, for comida.  We strolled through the Plaza Tapatia marveling and liking the increased number of indigenous vendors and their beautiful wares.  Quickly we came upon La Rinconda, a wonderful restaurant housed in a restored 19th century Mexican mansion.  The waiter must have seen us with ragged face, because he asked if we wanted a cool room...to which I enthusiastically answered "Si, por favor"!  We were whisked to a back portico covered room, full of plants, delightful in its privacy, yet close enough to hear the piano player in the main room.  We dined on beautifully grilled salmon, champignones with ajo, Caesar salads and thirst quenching drinks.

As we left we felt sated, content and slightly rested.  Walking out of the restaurant we also feasted our eyes on the Hospicio Cabañas, the old city orphanage turned into the present city's cultural center. 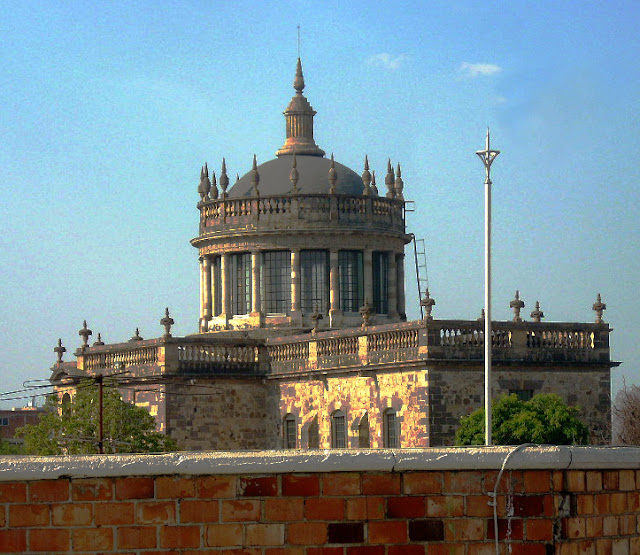 The Hospicio Cabañas in Guadalajara, a World Heritage Site, is one of the oldest and largest hospital complexes in Spanish America.  The complex was founded in 1791 by the Bishop of Guadalajara, in order to combine the functions of a workhouse, hospital, orphanage and almshouse. It owes its name to Juan Ruiz de Cabañas who was appointed to the see of Guadalajara in 1796 and engaged Manuel Tolsá, a renowned architect from Mexico City, to design the structure.

Tolsá's design was based on classic examples such as Les Invalides in Paris and El Escorial near Madrid. The buildings form a rectangle measuring 164 m by 145 m. These are single-storey structures which are 7.5 m in height. The chapel is twice as high and has a dome rising to 32.5 m. The complex is erected on one level, "so as to facilitate the movement of the sick, the aged, and children." 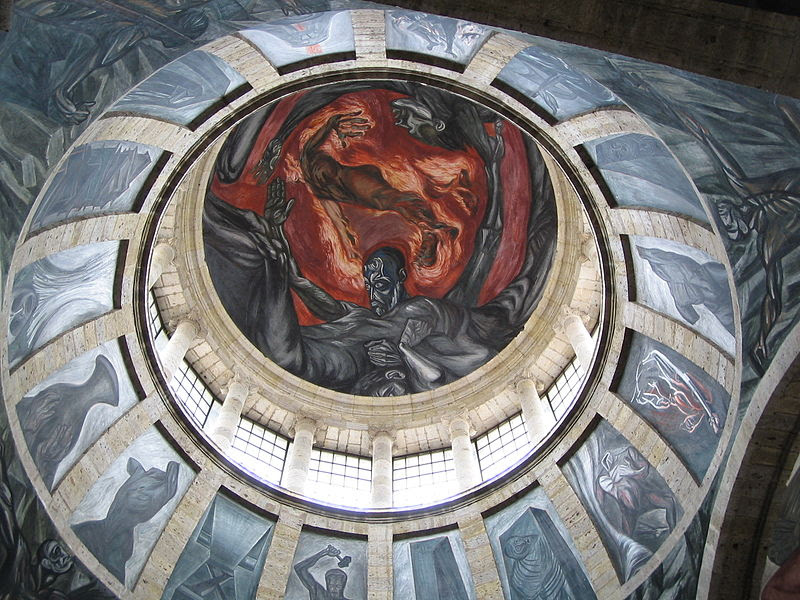 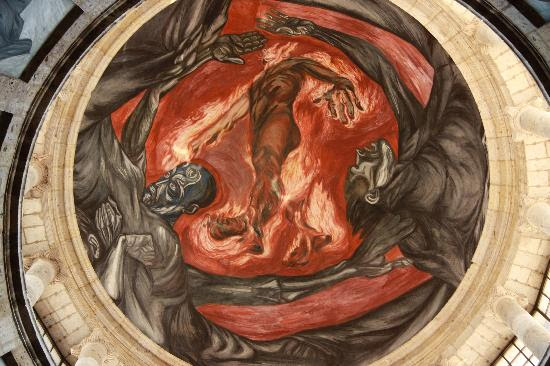 And so from the Hombre De Fuego, we made our way back via the carretera to our beloved Lake Chapala.  The vista of the lake upon cresting the surrounding sierra was dark with pendulous clouds....a form of smoke upon the water.  As we arrived home, we were greeted with rough winds, waves upon the usually calm lake and smoke in the air.  Our neighbors were burning grass clippings and the high winds were stoking the flames.  I made my way to the lake, as if to a sunset ritual, taking in the burning embers and swirling smoke.

Perhaps smoke is a sign of metamorphosis....change....decomposition...returning back into the soil to be born again as some of our lovely local foliage, or perhaps something else? 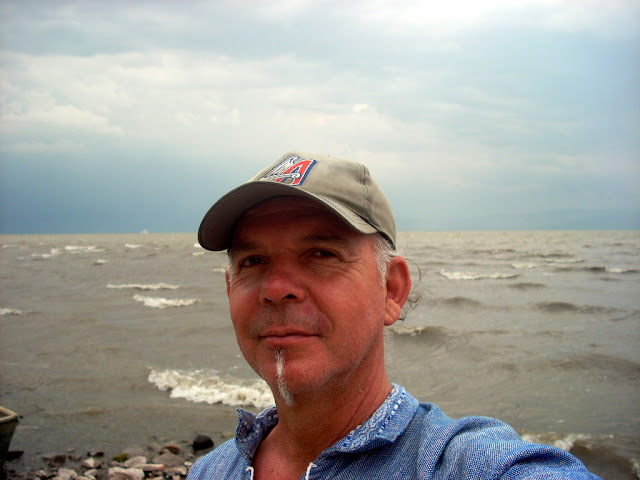