So it's Good Friday and Mexico is especially reverent and solemn during this time of the week.

I plan on attending mass somewhere, probably the church in Ajijic, which seems the most authentic.  As a child I remember the Stations Of The Cross, which were part of the Easter week service.  These were very dramatic and sad...but thinking more upon this I realize that it is all part of the rebirth process, of spring, the darkness before the light. 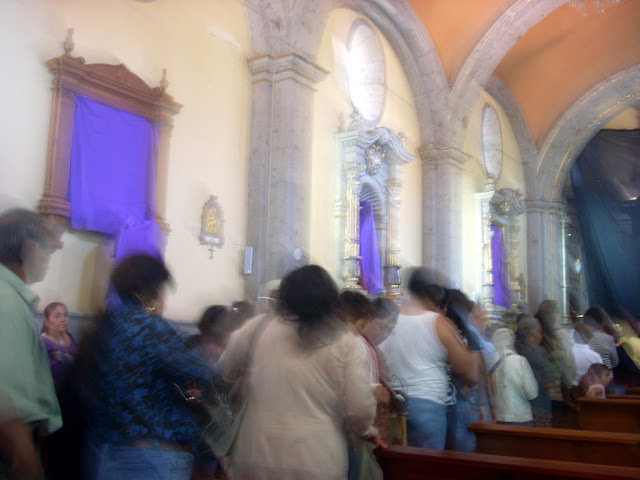 And like most of us, I welcome the spring with open arms for it's sprays of color and tsunami waves of scents.  We have a plumaria tree at the entrance of our house, which has been gifting us with beautifully fragrant flowers throughout our stay.  Brad carries them around as a nosegay...he is very sweet this way. 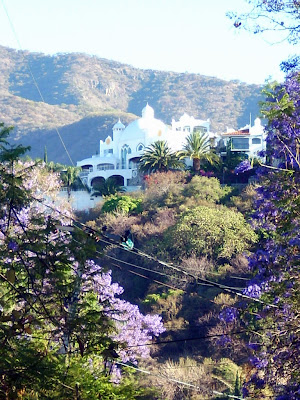 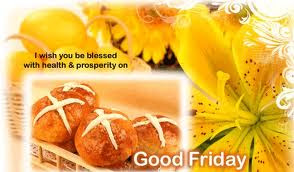 Hot Cross Buns. The familiar hot cross buns are sweet rolls with the sign of the cross cut into it, and they are one of several traditional European breads marked with a cross for Good Friday. According to tradition, these buns originated at St Alban's Abbey in 1361, where the monks gave them to the poor people who came there. (You may have your own recipe for sweet-rolls to which you can add currants or raisins before shaping and cut a cross in the top before baking; or you can buy them.) These Good Friday buns were very popular, and were sold by vendors who cried, 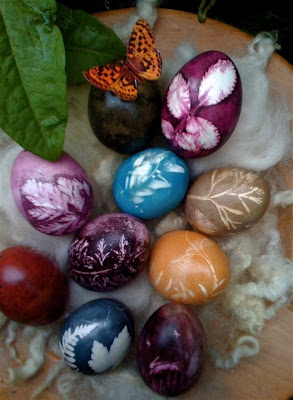 Good Friday was thought to be a good day for planting seeds (a reference to the Gospel about the seeds which must be planted in the ground to bear fruit as a metaphor for Christ's necessary death and His burial on this day) so if the weather permits, this could be a worthwhile activity.

Brad and I decided to talk a stroll into Chapala in the afternoon...it is only a mile from our house, a beautiful stroll along the Malecon...and as expected, it seemed as if all of Guadalajara and surrounding areas had come to Chapala for the week. 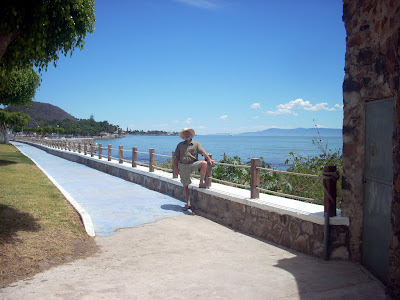 I ran into my friend Richard and his family strolling and had a wonderful visit with them.  Richard owns our local Abarrotes corner market in Guadalajara.  His family had come for a leisurely meal, a nice walk and distraction.

CCC - While in town we headed for the plaza to get some freshly squoozen Jugo Verde/Zanahoria juice (green/carrot juice)...our favorite snack. 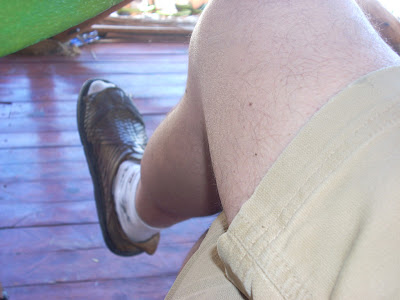 And while in the plaza why not do as the locals do and get your shoes shined?  I've had my huaraches for about 14 years now.  The were made in Mazamitla, right across the lake in the higher altitudes of the mountain there...and it was time for a shine.  The gentleman who shined them for me said they were way overdue...he was right.  But he made them seem like new somehow. 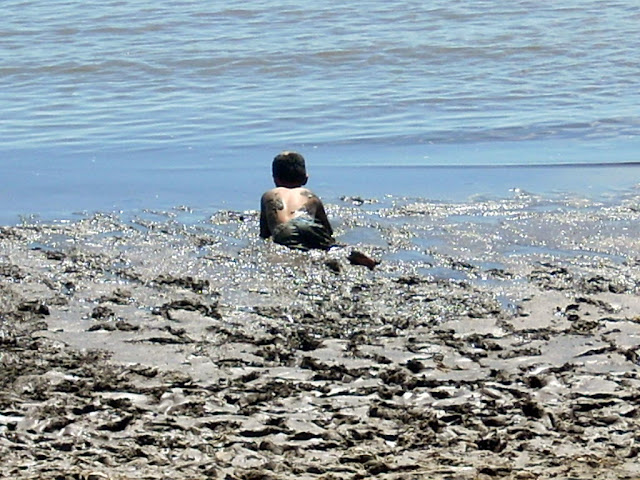 And on our stroll we happened upon this child, who decided that he would get his mud spa treatment at the lake's shore.  Both Brad and I laughed as we watched him relish the experience...and the price was right....free! 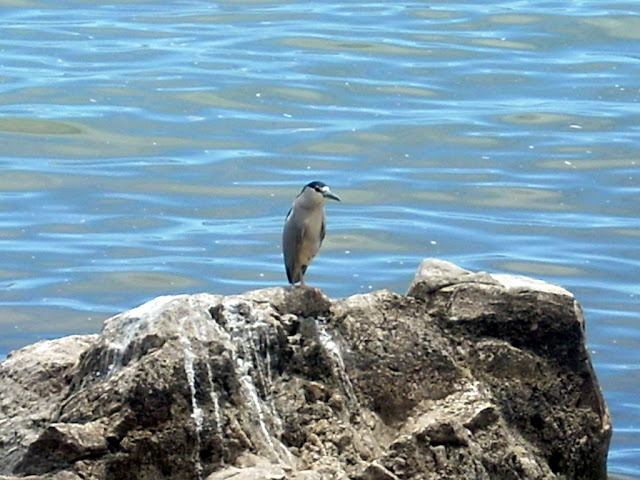 We also saw this shorebird...which we can't identify.  If any of our birding friends have an ID, please let us know.  At first we thought this might be a Great Blue Heron, but think perhaps not. 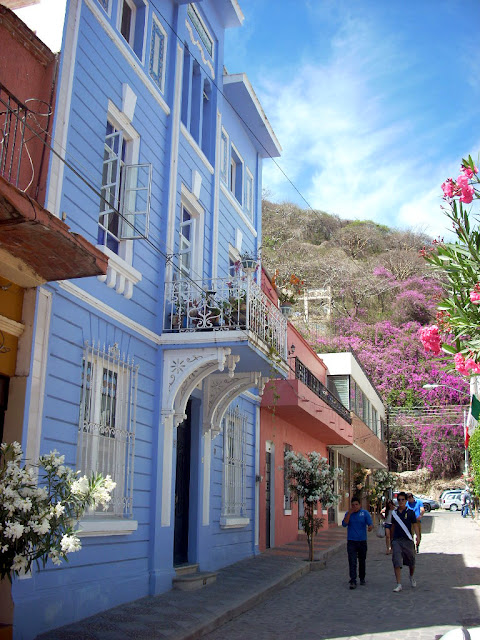 Continuing our stroll we found this lovely street named Porfirio Diaz, after the Mexican president.  It brought memories of the French Quarter.  The street was created around Mexico's Belle Epoque era.

After purchasing mucha fruta and veggies at the mercado, Brad and I split up.  He went back to the casita, and I was late for church.  I wanted to take in the Good Friday services, because they contained the Stations Of The Cross, which is a walk through history, restating the journey that Christ made to Calvary and his crucifixion.  I had always found these stations meditative and wonderfully reflective, but when asked by Brad how the church going went, I had to state the I mostly rolled my eyes at the service...it was disappointing to not have had the same, wonderful childhood experience again.

The day started off with a bike ride along the lake, heading toward Ajijic.  The air is brisk in the morning here, a great time to get in a good ride.  The mist on the lake lifts and you are gifted with panoramas that take your breathe away. 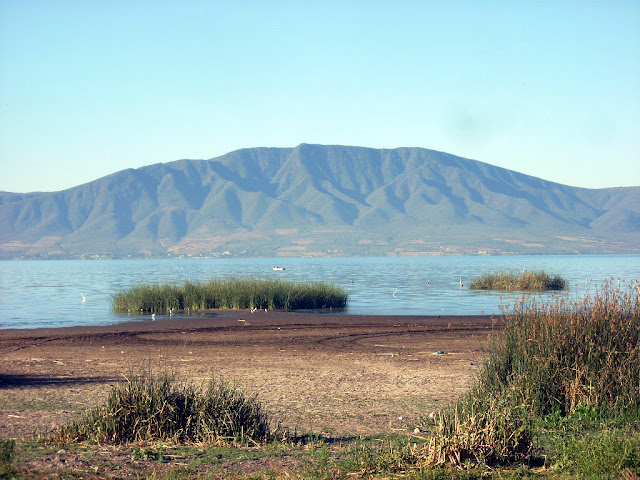 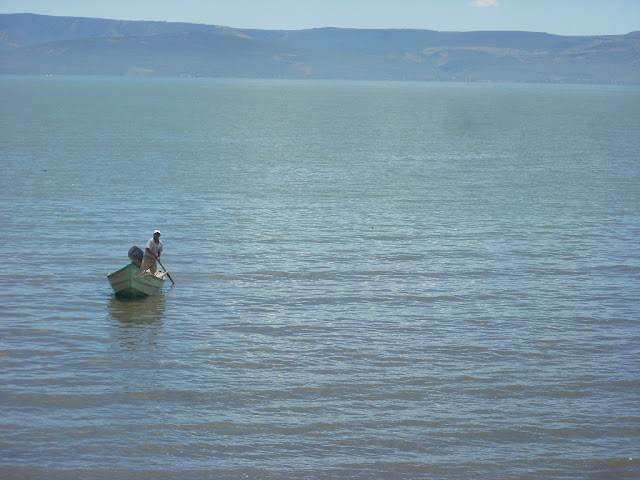 After my ride and stop for a latte and a newspaper read in the plaza in Ajijic, we are headed to the other end of the lake to a town called Jocotepec.   The meaning of Jocotepec is thus derived: Xoco-tepe-K, meaning Xoco (acid); Tepetl (hill); and K (place)."

The municipality of Jocotepec has a large variety of trees and plants, mostly located inside garden walls. The main plaza is surrounded by greenery, making it very inviting.  Vegetation is composed mainly of jacaranda, galeana, hule, pine, roble, cazuarina, mesquite, guamuchil, chaparrale and encino. Fruit trees such as mango, avocado, lime, lemon and orange are also abundant.

In North Jocotepec, acacia, huizache and palo-bobos predominate, while in the south (lake) side, there are a few sauce trees and sabinos. A large farm grows raspberries for export. Fields of corn, chayote are very common in this area.  Jocotepec seems to be a large agricultural export town. 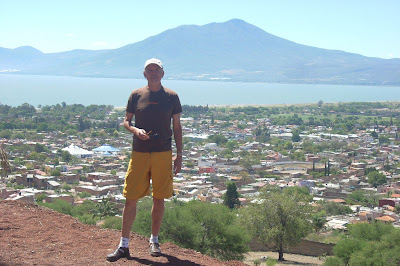 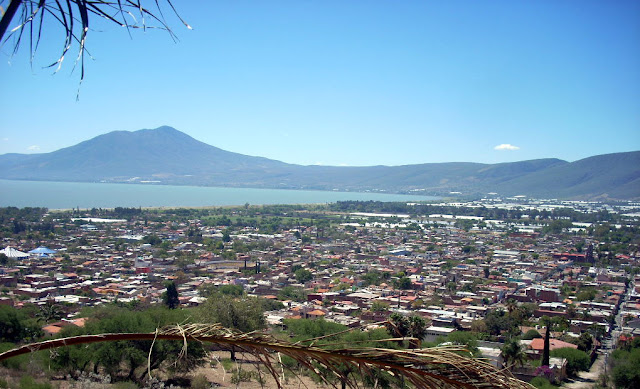 CCC - One of our favorite treats has been to sit in the Jocotepec plaza and have something the locals call a Frappe...which is an icy, blended ambrosia of coffee, ice cream, crushed ice, cinnamon and chocolate sauce.  On a hot day there is nothing better than to have one of these in hand, sippin' in the shade over looking the plaza.  Thankfully, the concoction has not changed in years, nor the hearty greeting by the locals. 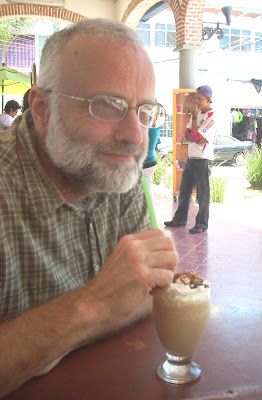 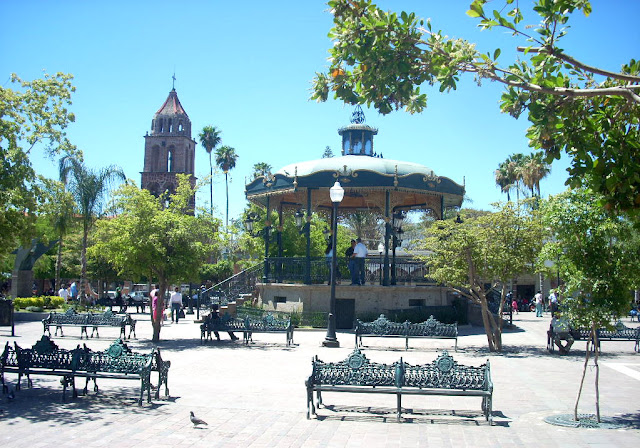 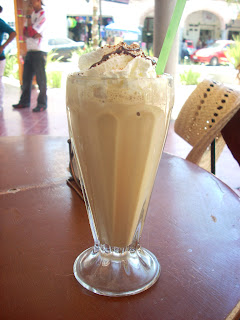 I was in need of thin, ankle-length socks so we wandering around town.  We found my socks and also found a new set of murals adorning the wall outside of the local cultural center.  Brad stated that there is always something new to see in the wonderfully constant, stable town. 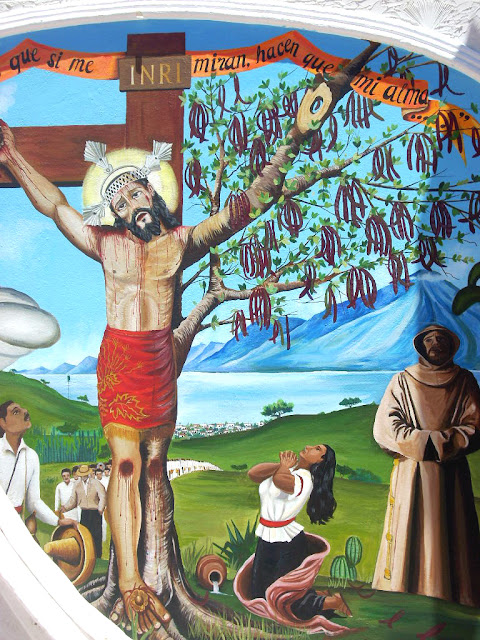 What caught our eye in this new mural panel was the crucified Christ with tree branches and roots for arms and legs.  The melding of the spiritual with the natural is so prevalently seen here and the image seems so natural in place.  The plastic arts are beautifully and flexibly represented in Mexico. 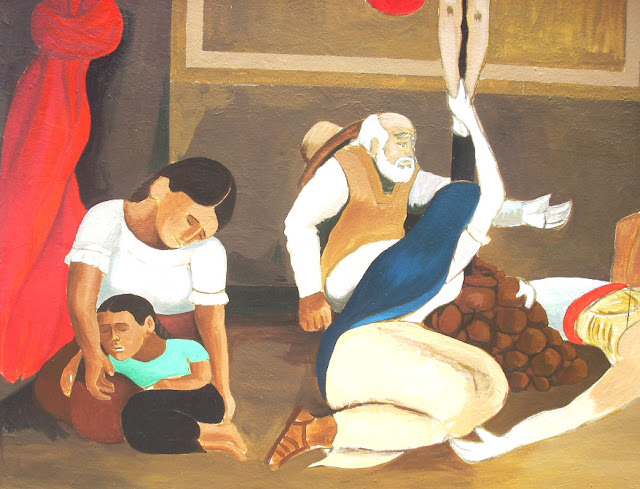 And this detail for an unfinished second panel was beautiful just the way it was.

CCC - Hunger was banging at our door so we drove back to San Juan Cosala, a lakeside town known for its spectacular views, its seafood and its lazy afternoon meals.  We chose Las Gaviotas because they had equipales and apparently no expats.  It was perfect. 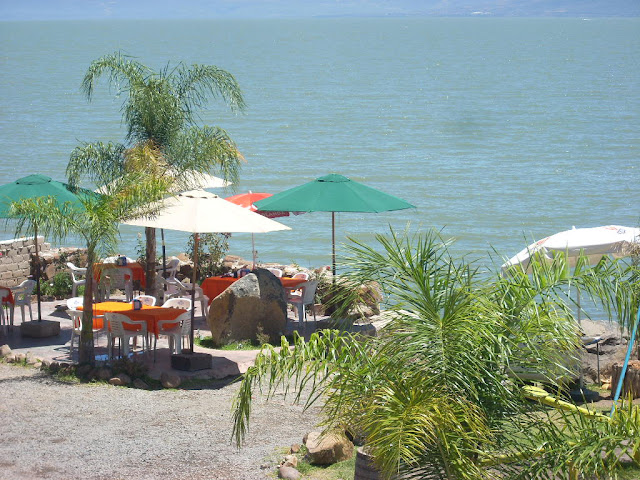 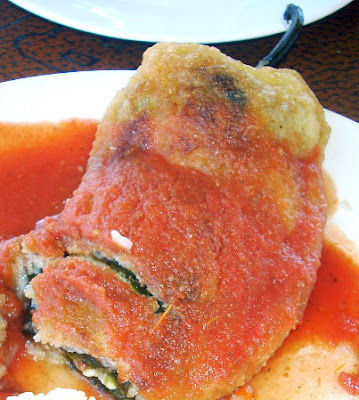 Completely sated after a long, leisurely meal, we drove back home for a siesta that lasted 4 hours.  By the time I awoke, it was dark outside and time to write this blog. 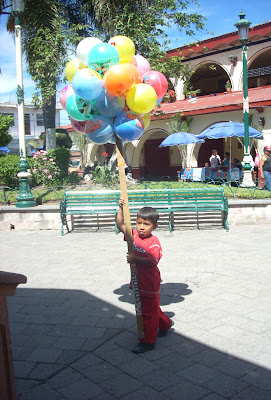 So for now, we sign off saying "Buenas Noches".  Remember life is just a bunch of globos waiting to be enjoyed.